Friday Cards Give Harness Players One Last Chance Before Christmas

While many tracks will be closed on Saturday and Sunday, typically their two busiest days, in honor of Christmas Eve and Christmas Day, standardbred players know that Friday evening is their last chance to pad their bankrolls before they venture out for some belated shopping on Christmas Eve.

Friday afternoon the focus is on Monticello Raceway in upstate New York where harness racing enthusiasts will seek to cash a few tickets on the half-mile oval not accustomed to offering high class competition. But regardless of the purses, there could be some value at hand. 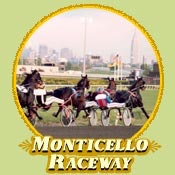 In the second race on the card, a non-winners of two races or $7500 lifetime event for younger pacers, look for railbound CJ's Last Storm to regain his winning ways after finishing third as the 7-5 second choice in an attempt to carve out all the fractions last week against similar. The three-year-old Feelin Friskie gelding won two starts back and moves well inside on Friday in a quest to notch his fourth win from 22 starts this season.

Then just the midway point of the card in a non-winners of two races or $7500 lifetime for pacing fillies and mares, look for Hickory Heartbeat (Jim Taggart, Jr.) to maintain her winning ways in this spot for owner-trainer Betsy Phillips. Hickory Heartbeat recorded her second straight tally last week in 1:59.3, one week after ending a prolonged drought by prevailing in 2:01.3 over an off track. Like CJ's Last Storm she will be in quest of her fourth win in 22 seasonal outings.

Then two races later in the penultimate race on the card, a non-winners of $515 per start/optional $12,500 claiming event for older pacers, look for the two inside invading horses to settle the issue in the lane. Railbound Gallant Seelster arrives from Yonkers Raceway off a pocket trip score in 1:55.3 against $12,500 claimers for owner-trainer Nick Clegg, while Steuben Patriot ships in from Batavia Downs off a handy score against similar for trainer Kimberly Asher and owner-driver Larry Stahlbaum.

Later that evening at Woodbine Raceway in Toronto, Canada, much of the attention will be focused on the fourth race when a compact field of six older pacers clash in the $24,000 Preferred. Nickle Bag (Trevor Henry) certainly deserves a chance to atone for last last week's failure at 2-5 after missing a week, while railbound American Virgin (Doug McNair) will be seeking to prove that his runner-up effort at 16-1 last week was no fluke. The durable and well-traveled Domethatagain, already a millionaire and prior George Morton Levy Memorial Series final hero, will seek his second straight for trainer Rene Allard.

That same evening at The Meadowlands in New Jersey, Friday's second race appears very intriguing. The non-winners of two races or $20,000 lifetime class features Dash Of Danger (Joe Bongiorno) who makes his first start for trainer Ron Burke. The three-year-old Western Terror gelding picks an ideal spot to debut, but he has been idle three weeks and scratched sick out of his last start at Saratoga Raceway after winning two straight there for trainer Melissa Beckwith and driver Mark Beckwith.
Several races later in a non-winners of three races or $40,000 lifetime for three- and four-year-old pacers, Spicebomb (Brett Miller) certainly merits a chance to atone for a fourth-place finish two weeks ago as part of the favored entry for trainer Kelvin Harrison and leaves from the ideal post five. But Yonkers Raceway invader Pawn Shop Junkie (Tyler Smith) is definitely an intriguing sort for trainer Mark Ford, having won last out over the New York half-mile oval in 1:55.1 and already sporting a solid 6-8-4 slate and $37,000 banked from 28 starts this year.

Then several races later in the eighth, a non-winners of $7500 last five starts class for older pacers, a pair of veterans who have clearly seen their better days will clash in another intriguing affair. Something For Doc (Andy Miller), a former force in the Levy series, will seek to display his back class for trainer Jennifer Lappe, while Doctor Butch (Jim Marohn, Jr.), a classy veteran with a solid 31-25-24 slate and $1.2 millon bankroll from 129 lifetime outings for trainer Linda Toscano, will look to regain his winning ways while currently falling through the conditioned ranks only four months after winning the tough, $45,000 Open Handicap at Yonkers Raceway against Open mainstays Melmerby Beach and PH Supercam.
Racing
Loading...