Game Over: Game On Dude Retired

Game On Dude has been retired. The gelded son of Awesome Again out of the Devil His Due mare Worldly Pleasure ends his racing career at the age of 7 with nearly $6.5 million in earnings and a record of 34-16-7-1.

After a $210,000 bid failed to buy the dark bay as a yearling, his career started in the Michael Mareina barn at Gulfstream. After an impressive maiden win second-time out, 'Dude caught the eye of Bob Baffert, was purchased privately, and relocated to Southern California.

Unraced at 2yo, Game On Dude ran for 4 years and won on both dirt and synthetic surfaces. Among his 14 graded stakes wins were: 'Dude also shipped out of Southern California to win the G2 Charles Town Classic and the G3 Lone Star Derby. 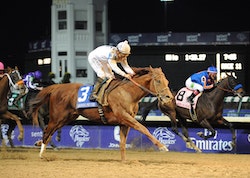 He ran in the Pacific Classic four consecutive years, winning Del Mar's signature contest in 2013. In addition to his 2 Hollywood Gold Cup wins, 'Dude also ran second in the 2011 edition and fourth in the 2014 renamed version at Santa Anita.

He tried hard to win one of the three straight Breeders' Cup Classic races he ran in, but fell short each time. His best Breeders' Cup finish was a runner-up effort in the 2011 Classic at Churchill Downs, when he lost the lead to Drosselmeyer in the final furlong.

A fan favorite loved almost as much as the other popular SoCal-based gelding Lava Man, Game On Dude will stay in the Baffert barn for the foreseeable future.