Girls Could Rule at Breeders' Cup on Saturday

Beholder is expected to be the second choice in the Breeders' Cup Classic. For many horseplayers she's the only equine that can beat Triple Crown winner American Pharoah. But, Beholder isn't the only female horse that could do something spectacular on Breeders' Cup Saturday. In fact, there are so many talented female horses running on Saturday, in a number of different races, that it might be difficult for the males to get out of the girls' shadows.

Check out the filly and mare talent on display at Keeneland Race Course for Saturday:

6-Banree - Trainer Wesley Ward saddles this two-year-old filly against the boys. After she failed in the Grade 1 Spinaway, Ward put her into an allowance race where she regained some confidence. She's got a huge shot to beat Whence, Dan the Go to Man and Sheikh of Sheikhs in this sprint stakes.

It goes without saying that the BC Juvenile Fillies is loaded with talent. Two horses in particular might end up on the Road to the Kentucky Derby, not the Oaks, the Derby, if they perform as expected. The daughter of Rachel Alexandra who was sired by Bernardini has star written all over her. She's started out her career by winning her first 2 races. Her mom won the Preakness Stakes and is considered one of the greatest female racehorses to ever live. Her dad won the Preakness, the Jim Dandy, the Jockey Club Gold Cup and the Travers Stakes.

The 7/5 morning line chalk might be the best two-year-old running in any of the juvenile races over the weekend. She is undefeated in 3 races. She's won all 3 races by a combined 16 1/4 lengths. her Grade 1 Chandelier win was ultra-impressive. There's a good chance that this Jerry Hollendorfer trainee puts in the most impressive performance by any horse in any race this weekend.

Bobby's Kitten, the 2014 BC Turf Sprint winner, and Undrafted, who won a Grade 1 race at Ascot in June, are both in this, but who's the 5/2 favorite?  Lady Shipman is the favorite. A three-year-old filly sired by Midshipman, Lady Shipman brings a stunning 8-1-2 record from 11 starts into this event. She's never won a graded race yet she's the favorite over some of the classiest male turf sprinters in the world.

Granted, there's no Wise Dan this year. Wise Dan might have scared off all of the talented female runners. Then again, even Wise Dan may have had trouble handling these tough ladies.

2-Recepta - Before you write her off, remember that she's 3 out of 4 at the mile distance with all 3 wins being on the grass. Overall, she's won 5 out of 11 lifetime.

5-Impassable - She would have been one of the favorites in the BC Filly and Mare Turf, but why face the brilliant Legatissimo, who is 8/5 in that race, when you can try and put a beat down on some fellas? Impassable has a much better chance than her 8/1 morning line odds imply. 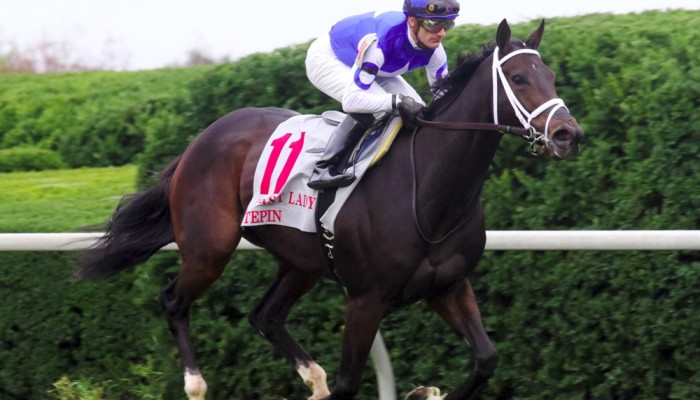 She has a 3 and 1 record from 4 races at the distance. She has a 4 and 3 record from 9 races on the turf. She's won 4 out of her last 6 races. Her only losses was by a nose to Hard Not to Like in the Grade 1 Diana and by a head to Dacita in the Grade 2 Ballston Spa. Oh, yes, she won the Grade 1 First Lady over the Keeneland turf in her last by 7 lengths.

9-Esoterique - Famed grass trainer Andre Fabre saddles this daughter of Danhill Dancer who has won her last 2 races, both grade ones. Esoterique can race over firm, soft or yielding ground. There is no ground that Esoterique can't race over.

9-Found - Golden Horn is the 4/5 chalk in the BC Turf. The John Gosden trained son of Caped Cross should be. But Found, who is 8/1 to win this, finished second by a length to Golden Horn in the Grade 1 Irish Champion Stakes on Sept. 12. She's trained by Aidan O'Brien and runs for John Magnier.

10-Beholder - The last time Beholder faced the boys, in the 2015 Pacific Classic, she pulled a Wonder Woman. The fellas didn't know what hit them. This field is much better than that field, but Beholder looks like the best horse in the race. In fact, the only knock on her is whether or not she'll bring her track with her. Can she run and win outside of California? Based on her work at Keeneland on Oct. 26 where she ran 5 furlongs in :59.2 the answer is, "Yes!"

This year's Breeders' Cup has a decidedly filly and mare feel to it. Legitimate female contenders will run in the BC Turf, BC Classic and BC Mile. A filly is the favorite to win the BC Turf Sprint and by late afternoon Saturday, a filly, probably either Rachel's Valentina or Songbird, could be the early favorite for the 2016 Kentucky Derby. Then there's Beholder. She might be so good on Saturday that she could grasp the Horse of the Year title from the first Triple Crown winner in the past 37 years.

If that's not girl power, I don't know what is.