So far, no American horse has thrown down the gauntlet. Accelerate and Diversify have looked fantastic winning races in their own backyard. West Coast, the highest-rated North American horse after Gun Runner retired, has yet to race since finishing second in the Dubai World Cup. Godolphin's pointing the Dubai World Cup Winner, Thunder Snow, to the Breeders' Cup Classic.

Is this the year Godolphin takes home the trophy for one of North America's most important races?

The closest Godolphin has ever come to winning the Breeders' Cup Classic was in 2001 when Sahkee finished second to Tiznow. Sahkee had won the Prix de l'Arc de Triomphe, maybe, the most prestigious grass race in the world.
Sahkee's breeding didn't imply he could run on dirt. Many North American racing fans believed Sakhee had no chance to win the Breeders' Cup Classic. In the middle of the stretch, it appeared Sakhee was home free. But, Tiznow rallied for the win. Sakhee'd have blown away his competition if not for Tiznow.

Godolphin hasn't produced a Breeder's Cup Classic contender since Sakhee. That should change this year because Thunder Snow has a real shot at winning North America's most prestigious race.

Thunder Snow Rocked It in the Dubai World Cup

As a 3-year-old, he easily won the UAE Derby. After a horrible run in the Kentucky Derby where he 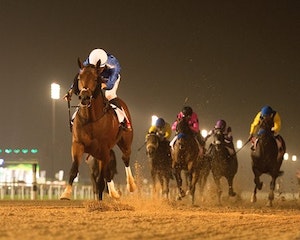 We can forgive Thunder Snow for his awful showing in the Juddmonte International. Not only was it his first race since winning the Dubai World Cup, he cut out ridiculous fractions. He also ran on turf for the first time since finishing fifteenth in the Queen Elizabeth Stakes last October. Ownership groups don't often prep a horse in a Grade 1, Godolphin did that with Thunder Snow.

They wanted to get a race into him before sending him to the Unites States. Now that the first prep is out of the way, trainer Saeed Bin Suroor will point Thunder Snow to the Jockey Club Gold Cup. If he performs well there, he should go off one of the favorites to win the Breeders' Cup Classic.

17 years have passed since Sakhee almost won the Breeders' Cup Classic. Thunder Snow has the talent and affinity for dirt to bring Godolphin their first Classic win.
Racing
Loading...