In horse racing, both harness and thoroughbred, class is pretty easy to figure out. Each race has conditions and most popular pp's indicate whether a horse is stepping up or dropping down in class. Brisnet for thoroughbred and Trackmaster for harness do.

You would think that it would be easy to tell if a greyhound is moving up in class or down also, because greyhound races have letter grades. At most tracks, the top grade is A and the bottom is M or Maiden for dogs that haven't ever won a race and that are under two years old.

So, if a dog wins a Maiden race, it moves up one class to J, which stands for Juvenile, although no one uses the term anymore. Or does it? To me, the step from M to J is more than just up one class. I think it's one of the biggest steps a greyhound will ever take.

Think about it, the dog just won a race in M against a field of dogs that have never won a race. Now, it's going to J, where every dog in the field has won a race. (Yes, there are some exceptions, but those are few and far between, so I'll ignore them.) The Maiden winner may have won its first or second race of its lifetime, except for schooling races.

Some of the dogs it will run against in J have run several Maiden races before they won and then several races in J. Some of those races, because they have more experienced greyhounds in them, may have been a lot faster and more contentious than the Maiden winner's races. There may have been more bumping, blocking and traffic on the turns. It's a whole new ballgame. 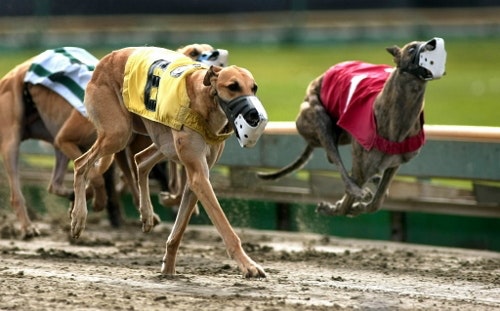 I like to give Maiden winners one or two races in J to get their sea legs, so to speak. I don't hold it against them if they run at the back of the pack in their first race or two. That's only normal. They're the new kid on the block and the other kids probably intimidate them a little. Dogs ARE pack animals, after all, with the instinct to establish a pecking order every time more than one of them gets together.

Another step that's actually more than one class up is when a greyhound goes from B to A, or from the next to the top grade to the top grade. It may only be one letter up, but it's a bigger step than it looks like. In A, the B winner will find dogs that have run in stakes races and against the best dogs at that track.

There may be dogs that have run against greyhounds that have set speed records at that track. It's not usual that those records get set in Grade B. They get set by dogs running in Grade A races with other greyhounds that challenge them to go faster than they've ever run before. The Grade B winner may try its best, but unless it's a really superior dog, its best won't be up to Grade A standards in its first race. Give it a race or two.

Don't be surprised if the Grade B winner doesn't make it on its first set of Grade A races. It will probably slip back down into B and may be discouraged enough that it doesn't even make it in B this time around, but slides farther down into C. But then, watch out!

It's usually in Grade C that the former Grade B winner that fails in Grade A wakes up and remembers how it got to Grade B in the first place. I play these drop down dogs that failed in A when they hit C and it often pays off. No matter how bad their most recent races look, if they've won in B and moved up to A, they usually come through for me when they hit C. If not on their first race, then they'll do it on their second.

Then they start moving up the grade ladder again and get to Grade B, win there and go to Grade A, where the bettors don't like them, because they see that they failed in Grade A before. But that was then and this is now and they're an older and wiser greyhound that has learned some strategy and gained some speed. This is the time to play them to win and as exacta and trifecta keys.

Next time you play your favorite track on Bet America, download your free program and look for dogs that are taking a second shot at winning in Grade A and at dogs that are running their second or third race in Grade J. If you catch them at the right time as they step up, you just might find yourself cashing some tickets on these spot plays.