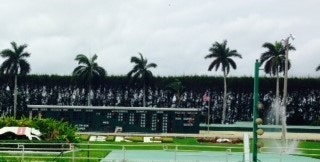 The 3rd round of the Puppy Stakes gets rolling at Palm Beach for the Wednesday Matinee. The 56 original greyhounds in the tournament are now down to 32 potential winners for the grand prize of $20,000. After this round, we will be down to the Sweet 16 that goes this Saturday.  Here is my race previews for the Puppy Stakes races at “The Beach.”

Many greyhound followers had #6 Storm Control winning this whole tournament a few weeks back and for good reason. With 13 wins already in his young career and a 29.36 sec best time, the Steve Schlachter owner racer has been most impressive.  With that patented rush to crush, he should get the lead here and cruise on home box to wire.

I’m still waiting for #3 Juggernaut to run a complete race, but just hasn’t been that impressive so far.  Storm Control rolls into the Sweet 16.

My upset pick to win it all at the beginning of this tournament was #2 Zonked. The North Shore Kennel racer got pinched to the back of the pack last time out but should rebound nicely in this one. Had finished in the Quinela the last 5 races before the last race hiccup. Will get outrushed by early speedster #1 PJ Smoke Em Out, who will run out of gas down the stretch. #3 BL Booster Gold from the Rader Racing team also has some late step in his game and should hit the ticket here as well. I’m going with Zonked to get back in the Winner’s Circle.

One of the more impressive races of the second round came from #6 Palm City Calico from B & B Racing. 29.77 seconds for the win and showed an impressive close on the backstretch. Gets the exact box same box to fire out of in this one and is sitting next to neighbor greyhounds who won’t be able to keep up.  I like Calico to get another W here. Two Rader Racing hounds to keep your eye on are #8 HS Bobaruskee, who is sitting in the prime box and #2 Java Howa, who is coming off a second round win.

The race of the day without a doubt.  #6 Ghost Buster has the best close in this whole tournament but surprised everybody, including track announcer Mike Jameson, when he bolted out of the box first last time out. 29.27 seconds for the win is by far the fastest time of any of these racers. Is undefeated in this tournament, along with #2 Kiowa Leer Lee. All of the early speed is in the inside of this race, which should open up a clear lane for Ghost Buster to close them out at the end. Who am I gonna call for the win? Ghost Buster!

Enjoy the third round of the Puppy Stakes and good luck owners & players!