Most horse handicappers use pace in their formulas. Most dog handicappers don't, although they'd like to if they could figure out how to figure pace in dog races. Actually, it's not all that difficult.

Of course, there are people who tell you that there's no such thing as pace in dog racing. They say that the races are so short that there’s no time for pace to develop. I beg to differ. Whenever runners compete, there's pace. It's the way the speed flows in a race and it's very hard to predict, but not impossible, in greyhound races. 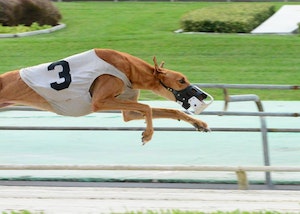 Some people think that you just have to find the dogs that break and have early speed, and that will be the pace of the race, because they'll set the pace. That would work in an ideal world, but that's not the world

Dogs don't always get the same break. Other dogs have their own ideas about who's going to take the lead. Too many variables get in the way of using the breaking dogs to figure out pace in many races. This is because the pace of a race is often set just before the dogs get to the first turn.

That's when the speed dogs either get to the lead or lose the lead because of accidents, shuffling or crowding. If they clear the turn, they often win or place. That's the crucial point to watch for if you're trying to figure out pace.

So, look at each dog's last couple of races and see how well they got around the first turn and where they were in relation to the other dogs on the first turn. That will go a long way toward helping you figure out the likely pace of the race they're running in now.