One of my favorite dogs was Josey Lane. She used to break out of the box, even an inside box, and veer sharply over to the extreme outside of the track where she'd very often be when she came in first several lengths ahead of the other dogs.

Some people used to say that she ran so wide, only the fence kept her out of the parking lot. She didn't though. She ran outside. There's a difference, although it might sound technical. Dogs like Josey Lane are outside runners. They prefer to run along the outside of the track. 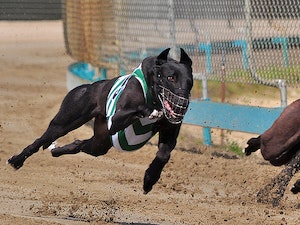 Now, this might seem to give them a disadvantage, because they run farther than the dogs that run along the inside of the track. However, if you think about it, the outside runners who run in the money are very strong dogs. Not only do they run farther, but they run faster than the other dogs.

Outside dogs aren't as prevalent as inside and mid track dogs, and the farther up the grade ladder you go, the fewer there are. Even rarer at any grade are dogs that run wide and manage to win, place or show. Wide runners, unlike outside runners, run along on the inside or the middle of the track, but go wide at times.

Most of the time, it's on corners, possibly because they've had problems with being knocked down by other dogs in the past on corners. More rarely, it's on the straightaways that they move over to the very outside of the track.

Sometimes, chart writers will indicate that a dog runs wide, when it really runs outside or vice versa. Sometimes, the comment says that it runs "wide and outside" which really confuses the issue. It's up to the greyhound handicapper to take note of as many dogs as possible so that they'll know what their running style is.

If you see a dog in the higher grades, and its comments say that it runs outside or wide, take careful note of how the other dogs run and also how that dog has done from the post position it's in for this particular race. That's the key to figuring out whether post position will help or hurt it in its present race.