Have you ever thought about how one little thing can change your life? Maybe you stopped to let someone cross at a crosswalk instead of speeding up and making them wait a minute. Maybe they were elderly and walked slowly and you sat there for five minutes, wishing you hadn't stopped. And then, maybe you get down the road to where a bad accident has just happened and you realized that - if you hadn't stopped to let that old man cross the street - you would have been the guy the paramedics are trying to get out of the car with the jaws of life.

Sometimes, when little things affect our lives, they aren't as dramatic as accidents we miss or pianos falling on our heads out of 10th floor windows. Sometimes at the dog track though, little things can affect whether we go home winners or losers. The worst thing is that we might not even realize that it's happening, so we just keep losing and wondering why.

Other people can be a big distraction at the dog track. Whether it's friends who keep talking when you're trying to handicap or strangers who yell and swear and carry on when they lose, people can certainly take our minds off our handicapping. I once bet the wrong track because I was so distracted by a father who was yelling his head off at his three kids, who were running around and spilling their drinks all over the floor and other people.

Friends are wonderful things to have, but even good friends can be a pain if they push you to bet a dog they like or try to discourage you from betting a dog that you like. Probably the worst distraction from people at the track is the negative vibes that some people put out. You know -  the people who are always complaining that the races are rigged, that they never win and that it doesn't do any good to handicap because they don't have any luck anyhow. 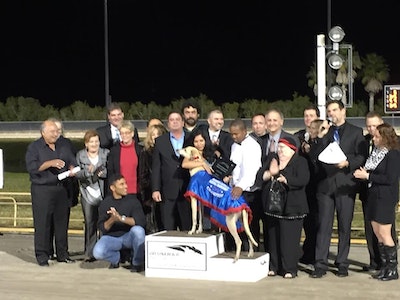 Somehow, all that negative karma just clouds my mind and I can't think straight until I move away from them. My feeling is that if you're negative, you'll attract negative luck and talk yourself right into losing. I'm not a Pollyanna, but I try to keep a positive attitude both at the track and in life in general. If you think you can't win and are completely negative about the dog track, why in the world would you go there in the first place? And what's more, why would anyone bet if they don't think they can win? That just doesn't make sense.

Outside of people, there are plenty of other distractions. Drinking and eating can get in the way of handicapping, watching the races and keeping track of your bets. I eat before I go to the track and rarely drink anything other than one or two cups of coffee while I'm there.

Carrying a bunch of stuff with you that you have to keep track of can take your mind off what's going on and at the very least, it makes it harder to get up and bet. You either have to carry it with you or leave it where you're sitting and most people don't like to leave their stuff behind. I've seen people juggling coolers and mini-TVs, even laptops, as they tried to make a bet. Heck, they could hardly find their program, never mind handicap it.

Kids are such a distraction that I won't even go into it, except to say that I only bring mine to the track when we're on vacation and I want to give my spouse a break. The day that I bring them, I don't plan any heavy betting. My feeling about kids is that - when they're with you - they need your attention and it isn't fair to them to ignore them while you do something else.

There's so much going on at the track. There are TV screens everywhere with replays, odds, horse races, other sports events and even news and weather. When I started going to dog tracks, the only screens showed replays. There were no simulcasts. No betting on horse races at dog tracks. No card rooms, slot machines or electronic machines of any kind.

We went to the dog track to bet on ten live races and we paid attention to those races. In some ways, it was a lot easier in those days. Nowadays, it's hard to find a quiet place to go over your program or even think in peace. So far, I've been able to find a place like that at most tracks, but as the live races diminish in importance and electronics and screens take over, they're becoming harder to find.

If you really want to avoid distractions at the dog track, I suggest that you go alone or with a friend who is as serious about winning at the track as you are. Someone with a positive attitude who doesn't have to talk every minute. Then, especially if there are no live races that day, go outside and sit.

I do that all the time and sometimes people stop me at the door to tell me that there's no live racing that day. They always look confused when I tell them that I know there's no live racing, but I want to sit outside anyhow. Apparently, I'm in the minority when it comes to wanting a quiet place to think. I often wonder if this is why 90% of the people who go to the track lose. Interesting question, isn't it?