Hounds or Horses? Which Races are Harder to Handicap

Some people love horse races. Some people love dog races. There are people who bet on both, sometimes at the same time, if they're at a track with simulcasts. I think horses are beautiful and graceful and I always play the Kentucky Derby. At OTB, I usually play the major thoroughbred track on Saturday and maybe a harness track or two. However, when it comes to betting, most of my money is on the dogs.

For one thing, it's a lot easier to handicap a dog race than it is to handicap a horse race. Horse races have more variables: weight, jockey or driver, equipment, type of race, number of entries etc. You can take hours going over the racing form and still not cover everything. Then there are the last minute scratches and equipment changes that have you scratching out lines and rethinking your whole betting strategy. Sometimes it’s overwhelming.

The dog races are simpler. There are no jockeys slowing down the race so another dog they've bet on can win. (I've seen this happen at the smaller horse tracks, let me tell you, and it was obvious.) There are no jockeys holding back on a dog to keep it from breaking too soon. Dogs break out of the box and run as fast as they can, as a rule. I figure they probably know what to do without having someone telling them when to pour on the speed and when to slow down. Apparently, horses don’t know enough to pace themselves and, as we know, pace makes the race in horse racing. 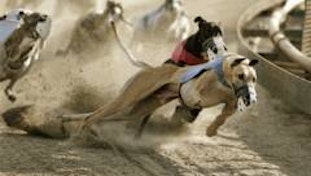 The dog races are faster. I have a pretty good attention span, but I find myself bored to tears in between thoroughbred horse races. When a race finishes and I look up and see that it’s 25 minutes to the next race, my eyes start to glaze over. Then there's walking them to get them warmed up, riding them to get them warmed up and getting them into the starting gate without one of them crushing its jockey. You don't get that with dogs. You don’t get dogs throwing their riders, either, or acting up in the gate, except for rare instances of one getting turned around.

Dogs get weighed in, trot out to the track in the post parade, get into the boxes and take off when the box opens. Fifteen or twenty minutes later, there's another race, giving you just enough time to cash a ticket or get a snack or a drink in between.

To me, dogs are a lot less complicated than horses. Oh sure, there are head-case dogs that only run when they feel like it and dogs that slack off if they can't see the lure or get the part of the track that they want, but most of the time, dogs just chase the lure around the track as fast as they can. Horses, on the other hand, are notional. They shy at shadows and stop suddenly for no reason that anyone can see. Some days, they're raring to go and some days, they seem to have little interest in running. Horses can break your heart, not to mention dent your wallet.

Nope, I’ll play the horses once in a while, but give me a dog race any day. A program; an hour or two to go over it; a cup of coffee and maybe a doughnut to sustain me while I handicap and I'm happy. I'll leave getting serious about the horse races to people like my friend, Willie, who is never happier than when he's wading through pages of past performances and statistics he keeps - which is probably why he wins more than he loses - figuring out which horse and jockey will get their noses over the finish line first.

Me, I'll go to the dogs, like I've been doing for almost 40 years now, as long as they keep paying off.