What is a False Favorite at the Greyhound Track?

Some people never bet favorites at the dog track. They feel that it's just not worth it to bet on a dog that only pays a little. Of course, that's if it comes in. Although favorites win about 30% of the time at most tracks, that doesn't mean that the one you bet on will come in.

I bet favorites if I agree that the dog should be at short odds. But before I bet, I make sure that it's not a false favorite. Here's my definition of that term. A false favorite is a dog that should be at longer odds, because it's not that much better than one or more of the other dogs in the race. 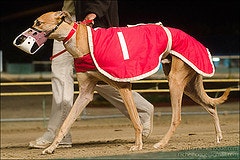 Sometimes, for whatever reason, the crowd will focus on one dog, even though another dog or dogs is just as good. Why this happens is a mystery to me. I think it's kind of the herd instinct. Someone, who may only be betting lucky numbers or birthdays, puts a lot of money on a dog.

Before you know it, other bettors are following and the dog gets bet down to ridiculous odds. Most people are followers, not leaders, and this is very true at the dog track. Me, except for rare occasions, I bet what I think is going to come in, not what someone else likes.  I think that’s the best way to bet.

Other false favorites are bet down because someone touts them, for reasons of their own. Sometimes, they want them to be favorites, so that it raises the odds on another dog that they're going to bet on. Sometimes, they just get a notion or a tip that this dog is going to come in and they try to get everyone else to believe it too.

Some false favorites just look better than they are. There are some dogs that look feisty and fit and people notice it and think that it's an indication of them being in form and ready to win. Sometimes this is true, but most of the time, it isn't.

Dogs who used to be great but have slipped out of form are often false favorites, because people are betting them on the basis of their history. It's never a good idea to bet on what dogs did a while ago as opposed to what they've been doing very recently. Dogs are either in form or out of form and it's important to stay on top of which one they're in at the moment.

If you want to avoid betting on false favorites, do your homework. Make your own picks from your program with whatever greyhound handicapping method you use. Then stick to those picks, instead of getting sidetracked by someone else's picks because they're favorites.