The first month of the 2014-2015 season is in the books at the Palm Beach Kennel Club and what a great start it has been!

Here are my Top 10 greyhounds currently racing at “The Beach.”

~5 straight wins to start the season

“The Queen of Palm Beach” is clearly the best racer here and is starting to garner national attention.  Has an excellent chance to take home the Track Title for wins this season (I predicted she would before the season started.)  Who can stop her right now?

One of the greatest super sprinters this track has ever seen.  Has continually pounded fields that didn’t include KB’s Like A Fox.

The other top lady racer here.  Has been in the money in every race she has started since April.  I will keep campaigning to have Leyla and Pebbles to start a rivalry here that would just be prolific.

One of the hottest racers at Palm Beach makes his first appearance in the Top 10. Has been blistering Grade A fields since the new season started.

After an extended break from last season, the 16 time winner last year has come back to the track rolling.  Has won three of his first four starts since returning. Look out for Majestic to make some noise this season.

Three race winning streak during this month. Loves the inside boxes and is hard to pick against if she gets her favorable setup. 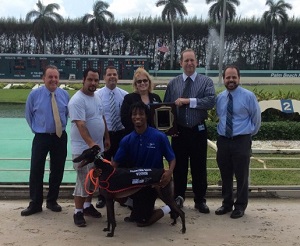 First time in the Top 10 for “Chip.”  Has really stepped his game up for owners Brian and Laura Brady in the new season. Great rush and a solid close has the future looking bright for this racer.

Possibly the best pop out of the box of any greyhound here. If he develops a consistent close, there will be a lot of W’s coming his way this season.

In the most wide open distance at Palm Beach, Enkludid has found instant success since moving up from the 545.  Has a lethal close and won four of five starts this month.