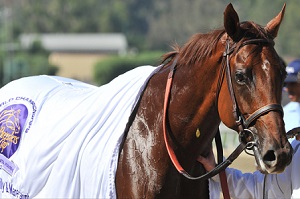 But for one coppery chestnut mare and the millions who have followed her career: it was anything but an ordinary day.

This was Groupie Doll’s final trip to the starting gate.

William “Buff” Bradley trained the daughter of Bowman’s Band to a stellar 23-12-4-4 record with over $2.6million in earnings and back-to-back Champion Female Sprinter honors. Bred by Buff and his father Fred, the mare was campaigned by the Bradley’s until after her second Breeders’ Cup Filly & Mare Sprint victory: after which she was sold for $3.1 million at the Keeneland November breeding stock sale to Whisper Hill Farm’s Mandy Pope.

Making the rare decision to keep the mare in training instead of shipping straight to the breeding shed, Groupie Doll went back to the Bradley barn and would make the last two starts of her storied career: ending with a total of 9 graded stakes victories.

As a final prep for the Breeders’ Cup, Groupie Doll ran in Keeneland’s signature sprint for older females. After breaking well in the field of nine, Groupie Doll settled in hand and made her move on the turn, finding some traffic trouble at the quarter pole before drawing off to a daylight 6-1/2 length margin.

“I was never convinced that she adored synthetic surfaces, yet she won the Thoroughbred Club of America at Keeneland in such convincing fashion in 2012 despite lacking room at the quarter pole. Even in defeat at Keeneland last fall

[in the 2013 Thoroughbred Club of America], she was so professional. It made me think of when people say that a basketball player looks good in his form and fundamentals, even when he has an "off" night shooting the ball. She always carried herself with presence and dignity, whether in a win or a loss.” – Keeneland track announcer Kurt Becker 4. Running Against the Boys

In a rare move for modern mares, Groupie Doll faced males three times in her career. She never beat the boys, but – tellingly for a talented sprinter – all three tries were at a flat mile.

The second was arguably the best race of her career: a whisker of a loss to Stay Thirsty in the G1 Cigar Mile

Perhaps she should be excused for the third and final try: in the 2013 Cigar Mile, she ran into heavy traffic and never quite got to run her race

Riding a four graded stake win streak, Groupie Doll shipped to Santa Anita as the post time favorite and did not disappoint. After being ridden along from the gate, she raced six wide down the backstretch before gaining the lead as she turned for home and proceeded to draw off from Dust and Diamonds by a comfortable 4-1/2 lengths in the end.

In what was a carbon copy trip of her 2012 win, Groupie Doll was under a snug hold early, edged up four wide on the turn, made a run at the leaders inside the quarter pole and dug in gamely to hold off Judy the Beauty and a fast closing Dance Card for an impressive repeat victory.

Though some wondered why a multiple G1 winner would go out against a G3 caliber field, Groupie Doll proved every bit the talented mare she is with a stunning 7 length score over the Gulfstream oval. After breaking the slowest she ever has, jockey Rajiv Maragh didn’t panic and let her gather herself before switching to the outside and making a big run off the turn. Once she hit the straightaway, Groupie Doll began to pull away from her foes, putting in perhaps her most devastating victory. One could say she saved her best performance for last.

"That was a fun day at GP. Called two Grade 1s and neither came remotely close to the highlight of the day. That goes to Groupie Doll. She's the best, and her connections are all class. Will certainly miss her, but she went out the right way.” – Gulfstream Park track announcer Larry Colmus (Facebook 2/9/2014)

Few horses command the kind of attention Groupie Doll did when she entered the auction ring barely a week after her second Breeders’ Cup victory and nearly two months before being crowned Champion for a second time.

But perhaps the best part wasn’t the crowd’s reaction to her: it was how Groupie Doll responded to a room full of admirers. When the bidding stalled, she stomped the ground as if to say “don’t you know who I am?!?” When the bidding ended, those perfectly pointy chestnut ears went up for one last picture in case anyone had yet to admire her.

And for auctioneers who are trained to remain stoic no matter what’s in front of them, few calls will ever be more heartfelt than Ryan Mahan’s “young lady: you’re about to join a pretty darn good broodmare band in a minute.”

Keeneland put together a beautiful tribute to this classy mare and the whole circus surrounding her $3.1 million sale...

So as we wish Groupie Doll a happy retirement making the next generation of racing superstars alongside her paddock-mates Horse of the Year Havre de Grace and Kentucky Oaks winner Plum Pretty, we ask you... what are your favorite moments of this fantastic mare? 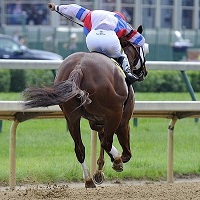