While much of the harness racing world will be keenly interested in Saturday night's stellar card at Mohawk Racetrack in Canada, serious and standardbred racing fans alike will quickly focus their attention to Monday's program at Harrington Raceway in Delaware, highlighted by the $150,000 Bobby Quillen Memorial for aged pacers and features the reigning horse of the year.

Monday's Bobby Quillen Memorial is the tenth race on the card and the final leg of the pick-4. Taking center stage in the track's signature event is Wiggle It Jiggleit (Montrell Teague), the 2015 harness horse of the year who drew the coveted rail in his return to the oval where he set the all-age track record and a world record of 1:49 last year at age three. Wiggle It Jiggleit has won 12 of 20 starts and banked $1.35 million this year and he has traveled across the land to face the sport's best older pacers.

In fact, Wiggle It Jiggleit will look to regain his winning ways after finishing second last week to Always B Miki in the $225,000 Jim Ewart Memorial at Scioto Downs in 1:47, a race already billed as the 'race of the year' to this point. Wiggle It Jiggleit was parked to gain command past a wicked 25.2 opening quarter, met pressure from Always B Miki by the half in 53 flat and down the backside and by three-quarters in 1:19 and was outkicked by that one in the lane.

But Wiggle It Jiggleit will not have to contend with Always B Miki on Monday and he will leave from the coveted rail as the likely 2-5 choice. But there are several pacers who could make things interesting early for the reigning horse of the year and the sport's top rated horse in the latest Hambletonian Society Top 10 poll.

Mach It So (Tim Tetrick) last year's Quillen hero, will start from post three following a solid 1:51.2 score against conditioned foes last Saturday night at Yonkers Raceway. Although he boasts seven wins and $195,000 banked from 19 starts this year for trainer Jeff Bamond, Jr., Mach It So has not really regained the form that enabled him to post a 6-4-6 slate and $650,000 bankroll from 23 starts last year, capped by wins in both the Quillen and the William Haughton Memorial at the Meadowlands.

But just to his outside is Luck Be Withyou (Eric Goodell), a genuine speedball for trainer Chris Oakes who parked Wiggle It Jiggleit past the quarter last week at Scioto Downs before finally turning him loose before the half. Luck Be Withyou owns a 5-3-2 slate and $180,000 banked from 14 starts this year and a mark of 1:47.4 at Pocono Downs and he has ample gate speed to make things interesting in the opening quarter mile if and Wiggle It Jiggleit turns him loose.

Last Monday evening at Harrington, Mel Mara (Corey Callahan) toured the oval in 1:50.1 to capture the $16,000 Open Handicap for trainer Dylan Davis in an ideal prep for the Quillen. But Mel 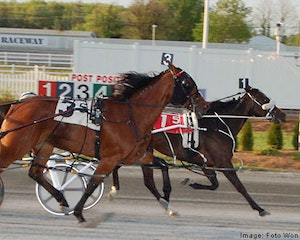 Mara, who also owns a victory over Always B Miki this season, drew the dreaded eight hole for the Quillen and will need to display speed and stamina in order to overcome that slot in order to upend Wiggle It Jiggleit and Luck Be Withyou on Monday night.

One race earlier in a non-winners of $5301 last four starts/optional $15,000 claiming race, Singing Saint (Morgan) and Intheblinkofaneye (Jonathan Roberts) both merit serious respect from posts one and two, respectively. Singing Saint was the beaten favorite against tougher last Monday here and draws the coveted rail and looms the one to beat at a short price. Intheblinkofaneye has won 10 of 23 starts this year for owner-trainer Tara Hynes and makes the 100th start of his career in this spot from post two.

One race earlier in the third division of the first elimination of the $20,000 Delaware Standardbred Breeders Fund, 'Team Teague' will once again take center stage as I Won Them Both (Teague) leaves from post three as the 4-5 favorite. This daughter of Mr Apples has finished third in each of his first two starts against conditioned foes here, but gets the nod here over Lillisbagsrpacked (Victor Kirby), Heart Crusher (Bart Dalious) and Diva Demands (Roger Plante, Jr.).

One race earlier in the opening leg of the late pick-4, railbound Mittnage A Trois (Morgan) will seek redemption in this non-winners of three races or $15,001 lifetime class for trainer Willard Reynolds. Mittnage A Trois broke repeatedly as the 3-5 favorite last week against similar, but the Mach Three gelding draws the coveted rail and gets the nod over Da Chief (Callahan), Alway'syourway (Ross Wolfenden) and Oncoming Storm (Jim Morand).

Then one race earlier in the $12,500 Open II Handicap for older pacers, Bad Boy Matt (Teague) looms the slight choice from post three for trainer Wayne Givens following a gritty score against conditioned foes here last week in 1:53.2, but Major Uptrend (McCarthy) merits plenty of respect despite being assigned the eight hole for Hall. Major Uptrend won the A Handicap at Ocean Downs two starts back in 1:53.2 and boasts a 1:49.1 mark at Dover Downs.

Several races earlier in the third, a non-winners of five races or $25,001 lifetime class for five-year-olds and under, keep close tabs on Nuclear Dragon (Roberts). This four-year-old Nuclear Breeze gelding trained by Brian Malone won his last outing here by 11 lengths in 1:52 after taking a non-winners of three event at Ocean Downs by 17 lengths in 1:53.2. Nuclear Dragon will leave from post eight on Monday, but he appears to have enough ability to overcome that outside slot and he may be among the rising stars on the circuit and on the undercard.
Racing
Loading...