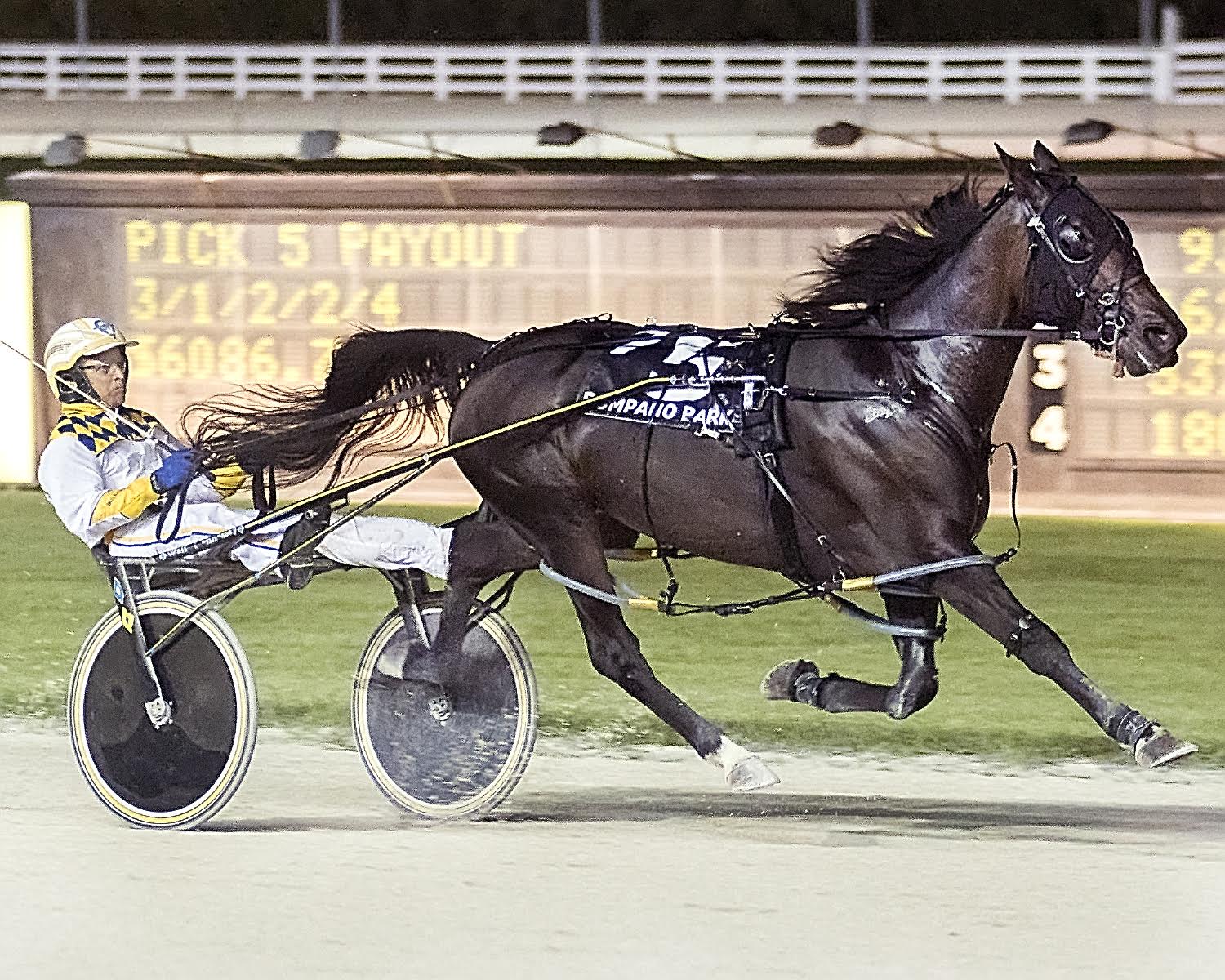 Godiva Seelster, the splendid 6-year-old daughter of Camluck, got picture perfect rating through early panels of :27.1, :57 and 1:26.1 before sprinting home in :27 to score a handy win measuring three lengths in 1:53.1 over the pocket sitting Goldstar Rockette (Kevin Wallis) with Leaveum Lady (Tim Maier) next in the parade. De Valeria and Asset Management completed the roster in the quintet.

Trained by Dan Hennessey for owners Paul and Patricia O'Neil, Godiva Seelster won for the seventh time this semester and 32nd lifetime, sending her career bounty over the $300,000 mark--$301,275 to be precise.

Boli, seemingly a bit unruly during the post parade and eventually causing a recall while refusing the gate, had the benefit of the magic Hall of Fame hands of Hennessey to help him compose and took the top trot in 1:56--his margin three-parts-of-a-length over Driving Miss Crazy (John MacDonald) and McKenzie's Star (Fern Paquet, Jr.). Tymal Recap and JJ Alex, the early leader, completed that roster. 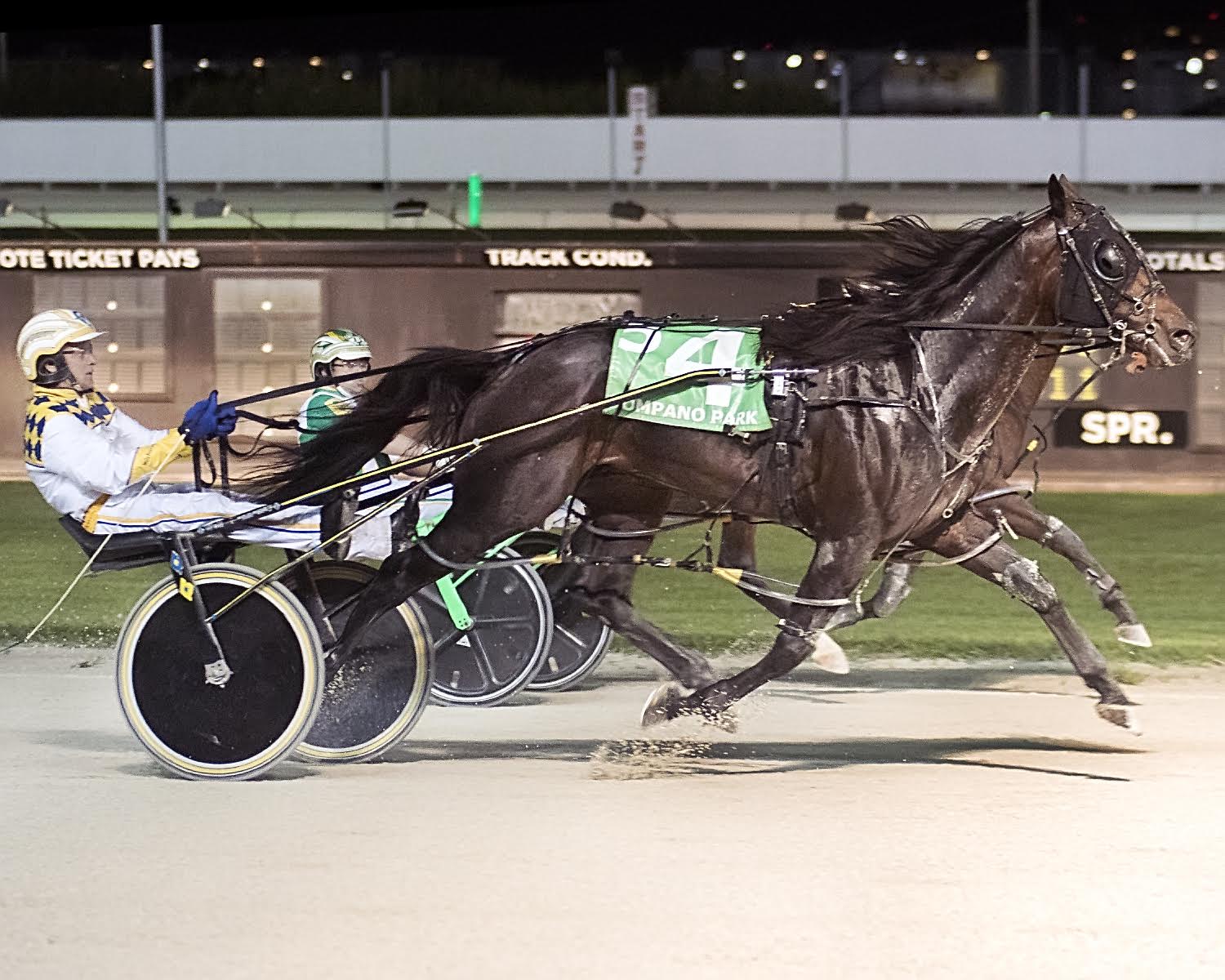 Hennessey had two other wins on the program, completing a "grand slam" with the trotter Sakima ($8.20) and Gleneagles ($2.10), in the third leg of the F.S.B.O.A. sponsored Sunshine State Stakes.

The latter, a sophomore colt by Mysticism, equalled his lifetime best performance of 1:54.3 while holding off the desperate late surge of the 30 to 1 chance Danza (Aaron Byron), closing quickest along the inside. The early leader, Conman's Dream (Jason MacDougall) finished third while ICU Diamond T and R Chism were next in the sextet of sophomores.

Gleneagles, "O-for 10" prior to the Florida Stakes season, is now three-for 13, as the Dan Hennessey trainee took the first two legs of the Sunshine State Stake at Sunshine Meadows before the Tuesday night Pompano win.

Now owned by the J L Benson Stables, Gleneagles pushed his lifetime bounty over the $84,000 with the bulk of the lucrative Florida Stakes season in competition over the next two months.

Owned and trained by 92 year-old George Napolitano, Imahonkyconchman had not won since May 20, 2015 covering 55 starts but benefitted when the unofficial winner, Highland Yankee, was "dq'd" for a pylon violation and placed fifth.

Imahonkyconchman wasn't the only one that blew up the toteboard on Tuesday as Keystone Christa and Aaron Byron teamed up to score a 1:53.3 win in the Open 2 event for pacing mares at odds of 54 to 1.

Owned by Lee Cullen and trained by Mr. Bev Kingston, Keystone Christa, a seven year-old daughter of Mach Three, was away fourth and took full advantage of very hot fractions of :26.4, :54.4 and 1:23.4 before roaring by late for the win--her third of the year in 29 starts.

Gold StarAurora, a daughter of Rock On, owned by Marianne Audley and trained by daughter Maggie, kept her record perfect at three-for-three in the juvenile filly pace with a win in a lifetime best 2:00 for Walter Ross, Jr.

Getting picture perfect rating, Ross took the two year-old filly through panels of :28.4, 1:01 and 1:31.3 before a :28.2 sprint home sealed the deal over the first time starter Prairie Cowgirl (Mike Deters) with Tay Tay M (Hennessey) next.

Prairie Panther, an altered two year-old son of Royal Millenium, unleashed a potent brush turning for home and scored a 1:57.1 win in only his second lifetime start.

Owned by Laurie Poulin along with drainer Mike Deters, Mike was in the bike for the handy win measuring 3 1/2 lengths over Gold Star Bugsy (Hennessey) with Maybe Ned (Bryce Fenn) next. Gold StarSpider and Fifth Son also earned checks in the field of six.

Gold Star Mysti, a three year-old daughter of Mysticism winless and off the board last semester, used a :27.3 sprint home to score in a lifetime best 1:57.4 for Walter Ross, Jr., her second straight lifetime mark after a 1:59 win at Sunshine Meadows.

"Mysti" let the favored Diamond Lily cut all the panels--:30, 1:00 and 1:30--before tilting out turning for home and strolling on by in the lane to keep her record for 2016 a perfect two-for-two.