Joyful Win has looked very good in his last two starts, showing blistering speed to lead all the way in both. However, he didn’t hold on by much at his most recent victory, and has a six-pound penalty and the outside barrier against him.

Chances are Joyful Win will run strongly, but his early speed could well play into the hooves of Special M., who won nicely three starts back at Happy Valley despite missing the start. And though well beaten at his next start at Sha Tin, he again put in a strong finishing run to take second behind The Runner back at the Valley a week ago. 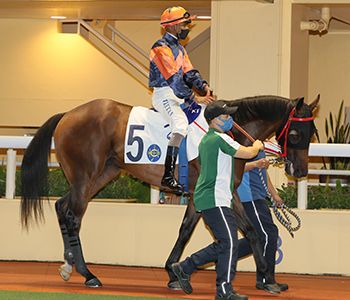 Special M will benefit from barrier three and is proven at Happy Valley over the 1000m trip. He should be very hard to roll.

Among the runners are three horses that have just two starts in Hong Kong between them: #8 Stoltz, #5 California Forest, and #10 Gold Marquis. All are worth considering for exotics.

Stoltz was a close second to Special M on his Hong Kong debut Dec. 15. The former Australian, who won three times in his home country, should be on the speed most of the way.

California Forest, whose two victories in Ireland when known as Coill Avon included one over multiple 2021 group one winner St Mark’s Basilica, faded for fifth on debut in Hong Kong Dec. 22. He also has a nice gate of five and could get a sit behind Joyful Win.

Gold Marquis, who won two of his three races in New Zealand when known as Designer Genes, races for the first time in Hong Kong. He looked very good in New Zealand but may find 1000m a little short. The market will be a good guide to his chances.

#1 Harmony Fire drops In class and has some good claims here, especially with Zac Purton in the saddle, while #9 Heart Conquered may be better for a seven-week break since his last start.