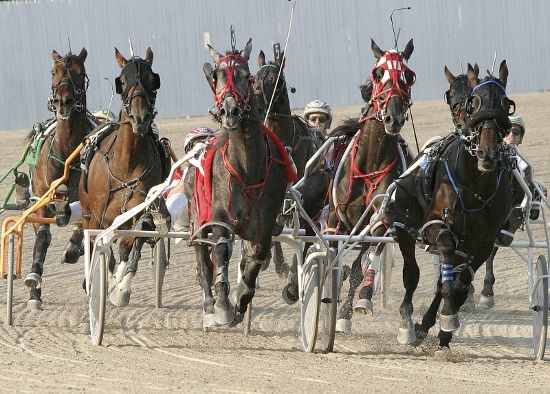 This Friday night Hoosier Park will honor one of the best Standardbreds of all-time when it presents the $325,000 Dan Patch featuring nine of the best older pacers currently in training.  The Dan Patch is carded as race 12 of a 14 race program with a first post of 5:45pm.

Friday's renewal of the Dan Patch Invitational, named in honor of one of the sports all-time greatest pacers and one of the first iconic figures in American sports, includes most of the best older pacers in the land and represents another battle in a continuing series of duels among the sports current elite.

Always B Miki (David Miller) has emerged as the best aged pacer in the land this season for trainer Jimmy Takter, although the five-year-old will head into the Dan Patch off a fourth-place finish in the $275,000 U.S. Pacing Championship at the Meadowlands last Saturday on Hambo Day.

Despite the dull effort and drawing post nine, Always B Miki looms as the favorite in the Dan Patch. He has won six of nine starts and banked $580,000 this season and boasts sharp scores in the $470,000 William R. Haughton and the $500,000 Ben Franklin at Pocono Downs (see video below).

Looking to hand Always B Miki another rare setback is Wiggle Jiggleit (Montrell Teague) the reigning horse of the year who has been overshadowed this season by his older division foe. Last week Wiggle It Jiggleit took a little sting out of Always B Miki early, sat a pocket trip and found room late to overtake the favorite for second in a good outing.

Wiggle It Jiggleit arrives with a solid 10-4-2 slate and $860,000 bankroll from 16 starts this year, following a HOY campaign in which he won 22 of 26 starts and banked nearly $2.2 million for owner-trainer George Teague, Jr. He has enough speed to make his presence known early and throughout the mile on Friday.

Last Saturday afternoon Shamballa (Scott Zeron) signified his return to the upper echelon when he raced second over behind Freaky Feet Pete and rallied late to overhaul Wiggle It Jiggleit and Always B Miki to capture the U.S. Pacing Championship in 1:47.1. Shamballa brings a 3-2-2 slate and $275,000 bankroll into the Dan Patch and he has always done his best racing on the bigger ovals.

While the top three have always done well on the bigger tracks, perhaps no horse has thrived at Hoosier Park as much as Freaky Feet Pete (Trace Tetrick). A four-year-old Rockin Image stallion bred and trained by Larry Rheinheimer, Freaky Feet Pete has been the darling of Indiana since his career began, winning 24 of 27 starts at ages two and three when he feasted on Indiana Sire Stakes foes and even beat Wiggle It Jiggleit last season.

Freaky Feet Pete (right) has won five of 10 starts this year and banked $325,000, but his last two outings have left plenty to be desired. He should actually benefit from last week's first over effort and a return home to Hoosier could enable him to find renewed life in his talented legs.

Others looking to join to elite this Friday in the Dan Patch include Mel Mara (Corey Callahan), who already owns a win over Always B Miki this season, All Bets Off (Matt Kakaley), the best of the Burke brigade who prefers the smaller ovals, Luck Be With You (Eric Goodell) another with abundant speed who thrives on the smaller ovals, Dealt A Winner (John DeLong) who rallied to get third in the U.S. Pacing Championship and Wakizashi Hanover, one of the sports top three-year-olds of 2015.

Speaking of three-year-olds, the sports top colt pacer and filly pacer  will clash on Saturday in the $300,000 Milstein at Northfield Park.

Betting Line (David Miller), hero of the North America Cup and the dominant force in the Ontario Sire Stakes, draws post two and will face Pure Country, the top three-year-old filly pacer in the land who leaves from post six after rallying to get fourth from the second tier in the Cane Pace last weekend.