“Pace makes the race” may be the most oft-repeated handicapping cliché in horse racing.

However, it’s often one of the most consistently correct.

This Saturday, 10 3-year-olds will contest the Preakness Stakes at Pimlico. The cast of characters includes Kentucky Derby winner California Chrome, who will look to capture the second leg of racing’s Triple Crown.

He looks imposing, and on his best day, he probably wins the Preakness for fun; bringing the Dumb Ass Partners Express to Belmont Park for the 12-furlong Test of Champions in three weeks. However, if he is to lose the race, it may be for the exact adage mentioned several paragraphs ago. 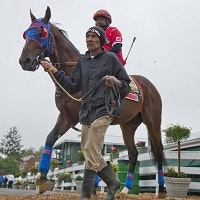 On paper, California Chrome’s biggest adversary may be Social Inclusion: a free-wheeling front-runner who will likely be gunned to the lead from the get-go. Pablo Del Monte and Ring Weekend will likely be asked early as well, while both Bayern and General a Rod do their best running from just off the pace.

This pace scenario makes for what could be scorching first quarter and half-mile times. California Chrome can sit off horses, but if he’s too forwardly-placed, he could grow a bit leg-weary in the lane, which is where my Preakness Stakes longshot comes into play. 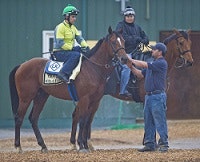 Kid Cruz may not be fast enough to win Saturday. This is certainly a major class test, given his two stakes wins have both come against much slower horses than the ones he’ll face in the Preakness. However, if pace makes the race: the Linda Rice trainee could be in the best possible spot... well behind the early leaders, with plenty in reserve.

We know Kid Cruz likes Pimlico, given his score in the Federico Tesio Stakes. He has three wins and a second in his last four starts, and his only poor performance came in his debut, a turf race. His breeding - by Lemon Drop Kid, out of a Tale of the Cat mare - indicates he’ll love the 1-3/16 mile distance, and he’ll likely be a monstrous price when the morning line is released.

Make no mistake: If California Chrome and Kid Cruz had equally-beneficial trips, I don’t think Kid Cruz would be within eight lengths of the Derby winner. However, with so much early speed in the race, and so few horses with proven late kicks, I think Kid Cruz has a much better chance than most think.

This most reminds me of the 2008 Preakness, where Big Brown towered over the field and won going away. Meanwhile, longshot Macho Again, who skipped the Derby and won a race off the beaten path (in this case, the Derby Trial) clunked up from sixth and completed a surprisingly-healthy $36 exacta for a $2 bet. Find a horse like that Saturday, box exactas with California Chrome and the dark horse, and suddenly, the Kentucky Derby winner isn’t such a terrible bet from a value standpoint.