Huge Breeders' Cup Win and You're In Races Remain

Although there are less than 50 days until the 2015 Breeders' Cup at Keeneland Racecourse, there still remains plenty of chances for horses looking to grab a spot on thoroughbred racing's biggest stage by beingvictorious in a win and you're in race. 35 win and you're in races remain on the schedule from now until Oct. 30, the first day of the 2 day Breeders' Cup Festival.

Out of those 35 races, 19 are for one of the 2 juvenile or 2 juvenile fillies races. What it means is that most of the contenders for the other races have already done their hard work. Two Classic win

and you're in races to keep an eye on is the Awesome Again Stakes at Santa Anita on Sept. 26 and the Jockey Club Gold Cup at Belmont Park a week later on Oct. 3. The big question regarding the Awesome Again Stakes is whether or not trainer Bob Baffert will prep Triple Crown winner American Pharoah in the race. Baffert might feel that he'll have a better chance at a Classic win with Pharoah, due to the busy spring and summer, by bringing a fresh horse into the race.

One horse that is sure to show up in the Awesome Again Stakes is the Richard Mandella trained Catch a Flight. Mandella's Beholder easily won the Pacific Classic. She's in the Classic if her connections choose to run her in that race instead of the Distaff. Catch a Flight hasn't secured a starting position just yet. It's very likely that Beholder, the likely second choice in the Classic if she runs, 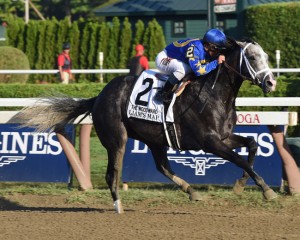 preps for her second battle against males in the Zenyatta Stakes, a win and you're in event at Santa Anita on the same day as the Awesome Again Stakes.

The most compelling aspect about the Jockey Gold Cup is to see which horses from Todd Pletcher's barn enter the starting gate. The connections of Liam's Map are still on the fence about running in the BC Dirt Mile or the BC Classic even though, as I wrote in a blog last week, Liam's Map's best chance at a BC win rests in the Classic and not in the mile. Perhaps, it's just wishful thinking to hope that the awesome son of Unbridled's Song ends up in a race against American Pharoah and Beholder. 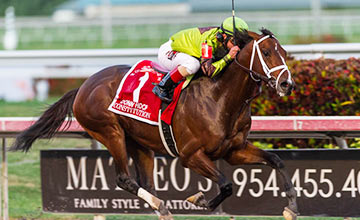 Constitution is the likeliest horse from Pletcher's barn to try for a Jockey Club Gold Cup win. With the turf experiment behind him, Constitution would become a serious contender for either the Dirt Mile or the Classic with a Jockey Club Gold Cup victory. The 111 Beyer Figure that Constitution ran in the Donn Handicap isn't that far off the 114 that Liam's Map and Beholder ran in the Whitney and the Pacific Classic. One of Pletcher's front runners will end up in the Classic, hopefully Liam's Map, and the other will end up in the Dirt Mile. At least, that's the way that it's looking.

One final note about the Classic is that many sports books in Las Vegas have released their odds on a multitude of horses to win the Breeders' Cup Classic. As to be expected, the favorites are American Pharoah and Beholder. Third choice is Whitney Handicap winner Honor Code while Liam's Map sits at double-digit odds.
Racing
Loading...