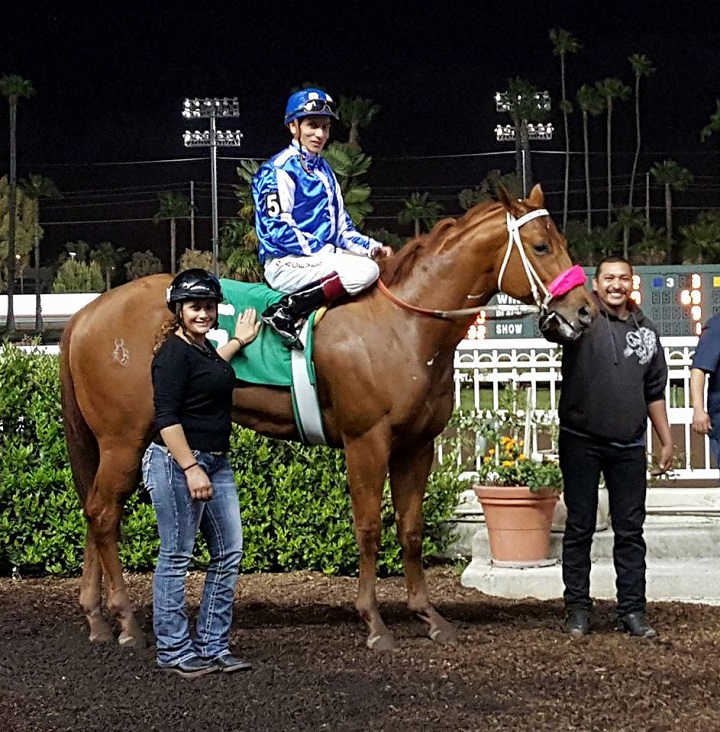 Sunday night will be a night to remember for the Aceves family  at Los Alamitos.  Trainer Adriana Aceves and her husband jockey, Rodrigo Aceves, teamed to win all three trials to the 400-yard, $210,000  El Primero Del Ano Derby Grade 3  for 3-year-olds on March 13 with fastest qualifier Mi Viejo, second-fastest trialist El Compa Jv, and the much-improved Eternity.

For the Aceves family, their trials night of “living life is fun and we’ve just begun” started with Eternity winning the first trial as the longest shot in a field of seven at 32-1 odds.  It was the first career win in 10 starts for the sorrel gelding Adriana Aceves claimed for $16,000 on January 8.

Adriana and Rodrigo’s “high hopes we have for the future” continued in the second trial with Mi Viejo posting the fastest qualifying time of 19.831 seconds.  Owned by Rancho El Alacran, the sorrel colt scored a half-length victory over favored My Favorite Check, the winner of the Los Alamitos Maiden Stakes on February 21.  The El Primero Del Ano Derby will be Mi Viejo’s fourth finals after previously qualifying for the John Deere California Juvenile Challenge, the Golden State Million Futurity, and the Los Alamitos Two Million Futurity in 2015.

Then in the third trial, El Compa Jv dazzled with a 1 1/4-length win, the largest margin of victory in the trials, in the second-fastest qualifying time of 19.856 seconds.  The sorrel colt owned by Rancho El Alacran was coming off a fifth-place finish in the Los Alamitos Winter Derby, the first Grade 1 stake of the year for 3-year-olds.

Aceves decided to ride stakes veteran Mi Viejo in the final.  His competition will include the consistent My Favorite Check and Rite Regal, one of two in the race for trainer Jose Flores along with We Like Corona.  Rite Regal stumbled out of the gates in the first trial as the 4-5 favorite, but the Winter Derby finalist who has won four of eight starts recovered to take second by a nose.