Few regions in the country are as enjoyable this time of year as Arizona.  Racing fans have two tracks to follow in the spring: Turf Paradise in Phoenix and Rillito Park in Tuscon.

Turf Paradise offers a mixed meet through May 7. Quarter Horse players cannot dismiss  trainer Matt Fales, who, once again, tops the Quarter Horse trainer leaderboard.  Fales began training in 2005 and divides his barn between Turf Paradise and Los Alamitos.  On Sunday, his trainee, Hoot And Holler captured the $5,000 Maiden Stakes. Bred and owned by his parents, Carrie and Ralph Fales, the Carters Cartel gelding was the third-fastest qualifier in trials contested on January 15. 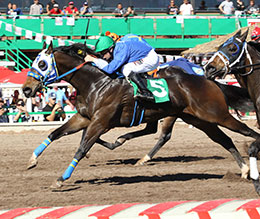 “He had some growing pains early in the spring,” Fales said of the now 3-year-old Hoot And Holler. “He had bad luck in the John Deere Juvenile last year, but hopefully will be ready for the Bank of America Challenge in April.”

The 2017 live racing season at Rillito Park gets underway on February 11 and will continue through March 19.