HOUSTON, TX – One week before the city of Houston will host the New England Patriots and Atlanta Falcons in Super Bowl LI, another premier sporting event is certain to delight racing fans and visitors. Sam Houston Race Park will proudly present its Houston Racing Festival on Sunday, January 29 at a special post time of 12 pm (Central).

A quality field of fillies and mares will compete the Grade 3, $400,000 Houston Ladies Classic on Sunday, January 29. Now in its fifth running, the Houston Ladies Classic anchors The Houston Racing Festival, which also includes the Grade 3, $200,000 John B. Connally Turf Cup, the $75,000 Frontier Utilities Turf Sprint, the $50,000 Houston Distaff and the $50,000 Space City Stakes. 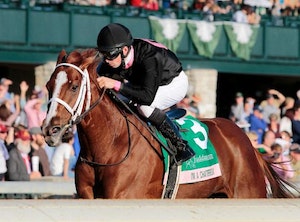 This year's edition of the Houston Ladies Classic enticed several new owners, trainers and jockeys as well as a very familiar horseman: Larry Jones. The affable Kentuckian is hopeful that I’m a Chatterbox will be his third champion in the mile and one-sixteenth main track feature. The 5-year-old daughter of Munnings, bred and owned by Mr. and Mrs. Fletcher Gray, has been installed as the 6-5 morning line choice in the field of seven fillies and mares. She broke her maiden at Keeneland on October 15, 2014, and boasts three Grade 1 wins and over $2.2 million in earnings in 17 career starts. The Houston Ladies Classic will be her first start since the Grade 1, $2 million Longines Breeders’ Cup Distaff last November at Santa Anita. Jones has been pointing I’m a Chatterbox to this stakes since she resumed training at Fair Grounds in December. Jockey Florent Geroux, who won his 1,000th career race last month at Fair Grounds, will pilot the chestnut mare from post position four.

“She’s doing really well and we look forward to sending her to Houston,” said Jones from his base at Fair Grounds. “This stakes has been good to us; it’s an easy trip to Houston, and of course, the money is so good.”

Jones has won two editions of the Houston Ladies Classic with two Fox Hill Farms, Inc. homebreds; first with Joyful Victory in its inaugural running in 2013, and then with Cassatt in 2015. Jones, 60, whose list of racing champions includes 2011 Horse of the Year, Havre de Grace, has been a strong supporter of Sam Houston Race Park.

“Sam Houston’s track surface has always been kind to us,” added Jones. “Our horses run well there and come back with no issues.”

Family Tree, a 4-year-old Smart Strike filly owned by Gary and Mary West and trained by Wayne Catalano, will break beside I’m a Chatterbox on Sunday afternoon. She exits a dominating victory in the $300,000 Zia Park Oaks on November 23, a race that is also part of the Penn Gaming Racing Challenge. The Kentucky-bred filly ran third in the Grade 1 Alabama at Saratoga and notched graded stakes wins at Indiana Grand and Prairie Meadows. Julien Leparoux, who was aboard Family Tree in her victory in the Grade 2, Indiana Oaks, will reunite with Family Tree, at odds of 9-5.

“She’s really on her game,” stated Catalano. “We were very pleased with her win at Zia Park and like her draw on Sunday. She will face some very nice fillies, but she always seems to put herself into each race.”

Seven-time Eclipse Award winning conditioner Todd Pletcher will send in Red Oak Stable’s Unbridled Mo. The 4-year-old filly by Uncle Mo had her five-race win streak snapped last November in the Grade 3, $250,000 Comely at Aqueduct. She has been training forwardly in Florida, and will be ridden by Jose Ortiz, who drew the far outside gate. Pletcher, who will saddle Neolithic and Keen Ice in Saturday’s $12 million Pegasus World Cup at Gulfstream, looks for her to rebound on Sunday.

“She didn’t get away from the gates at Aqueduct,” said Pletcher. “I am hoping she will have a better start in Houston. We have confidence in Jose, who rode well for us in New York. It looks to be a good race with good fillies and top riders.”

The field also includes Gainsway Stable’s Danzatrice, who won the Tiffany Lass at Fair Grounds for Hall of Fame conditioner Steve Asmussen; Iowa Stallion Stakes winner, Another Bond Girl, the local hopeful for the Brent Davidson barn at Sam Houston Race Park and Wes Hawley’s Steel Cut, a 6-year-old Cactus Ridge mare who was victorious is the Oklahoma Classic Distaff at Remington Park on October 21. Many will be rooting for Tiffany Case, and trainer Eric Reed, who certainly deserves good fortune in 2017. Reed’s Mercury Equine Center in Lexington, Kentucky, was devastated by a fire on December 18, which took the lives of 23 horses.

The first running of the Houston Ladies Classic in 2013 was formed to serve as the marquee race for Sam Houston Race Park’s Thoroughbred racing season. It was awarded its graded status by the American Graded Stakes Committee in December, 2015 and remains the richest Thoroughbred race in Texas. The Houston Ladies Classic will be the first stakes of the Penn Gaming Racing Challenge. Now in its fourth year, will incorporate over 20 stakes races in 2017 worth over $5.5 million.

"In just its fifth running, and second year as a graded stakes, the Houston Ladies Classic has attracted an impressive group of fillies and mares," said Matt Crawford, Sam Houston Race Park's racing secretary. "We look forward to presenting a quality day of racing and getting the Penn Gaming Challenge off to a great start."

The Grade 3, $200,000 John B. Connally Turf Cup, will be run at the distance of one and one-half miles for the second year in a row. Trainer Michael Maker has won four of the last five editions of the Connally with Papa Bodie in 2012; Admiral Kitten in 2014; Coalport in 2015 and last year’s running with Skychai Racing LLC’s Da Big Hoss. He will make the trip to Houston on Sunday and saddle three of the nine turf specialists in this year’s field. Michael M. Hui’s Greengrassofyoming ran fourth in the Grade 3, Kentucky Turf Cup at Kentucky Downs and followed that with a victory in the Grade 3, Sycamore at Keeneland. The 7-year-old son of Quest is closing in on the half-million earnings mark and will be guided by Robby Albarado from post position five. Albarado celebrated his 5,000th career win last weekend at Fair Grounds and piloted three previous Connally champions: Rod and Staff (2000); Fort Prado (2006) and Acting Zippy (2010). Maker has named Jose Ortiz to ride Bigger Picture for Three Diamonds Farm and Florent Geroux on Sarah and Kenneth Ramsey’s Oscar Nominated, a 4-year-old son of top turf sire, Kitten’s Joy.

“He’s a deep closer,” said Maker of Greengrassofyoming. “Bigger Picture won the Red Smith against a quality group of horses and Oscar Nominated will be stalking the early pace.”

“We are thrilled to partner with Sam Houston Race Park for the 2017 Houston Ladies Classic,” said Michelle Mason, Director of Communications for the American Heart Association. “Heart disease is the number one killer of all women and the sad thing is, 90 percent of women don’t even know they have a risk factor until it’s too late. By encouraging the community to go red on January 29th, we are hoping to target a new group of people to help us share our mission to build healthier lives free of cardiovascular diseases and stroke just in time for Heart Month in February.”