Quarter Horse racing continues to grow at Indiana Grand and horsemen will be able to compete in 20 stakes worth an estimated $1.5 million in purse money. There will be six all-Quarter Horse dates, starting with the first one on Saturday, June 4.  The track’s Quarter Horse stakes schedule is topped by the 300-yard, $200,000-est. Gordon Mobley Futurity on June 18. The Mobley Futurity will be joined on June 18 by the 300-yard, $100,000-added Jaguar Rocket Stakes (R) for Indiana-bred 2-year-olds.

There is a great deal of support from Quarter Horse Racing Association of Indiana (QHRAI) and the stakes schedule has been modified this year to give owners greater opportunities for the horses to participate in more of the bigger races. 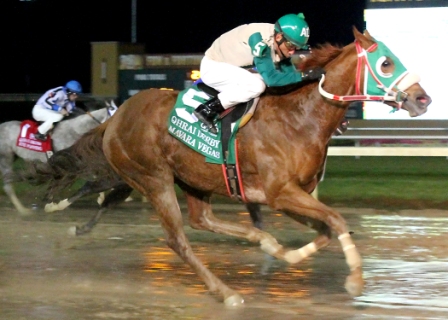 Trainer Randy Smith continues to set a high standard of excellence.  Last year, he became the first Quarter Horse trainer to ever top $1 million in purse earnings for one season and shattered the mark of most wins by a trainer in one season. He is now ranked second on the list of all-time leading Quarter Horse trainers at Indiana Grand with 99 career wins in only four years of competition.  Other trainers to watch include Anthony Cunningham, Erin Thompson, Matt Frazier and Dicky Wayne Benton.

For more information and a complete stakes schedule, visit www.indianagrand.com.