Boxer Jack Dempsey had a hardscrabble start. Born in 1895, he spent his childhood moving around with his parents. He lived in Colorado, West Virginia, Utah — wherever his father could find a job. By age eight, he was no longer in school. By age 16, he left home. He became a hobo, riding the rails.

He started dropping into bars and asking for fights. To lay the challenge required bravado. To win required talent. 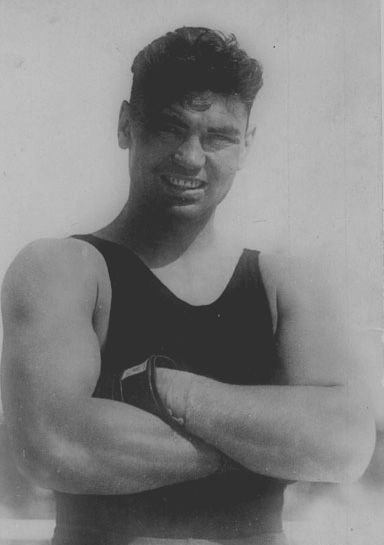 Dempsey's ability transcended the barroom. It took him past the ramshackle saloons. He fought around Utah, then the West, then the whole United States. As he climbed the ranks, everyone always knew where he started. They called him the "Manassa Mauler" because he was born in Manassa, Colorado.

Dempsey first competed for the world heavyweight title in 1919, against the taller and heavier Jess Willard. Dempsey knocked Willard down seven times in the first round and won by corner stoppage. He was champion through the first half of the 1920s. Even after his professional boxing career ended in 1927, when Gene Tunney knocked him out at Soldier Field, he remained an American superstar.

He also opened a restaurant in New York City: Jack Dempsey's. Originally located across from Madison Square Garden, it moved to Times Square.

Jack Dempsey's location in Times Square was right next door to another restaurant, the Turf Restaurant, owned by Jack Amiel.

Amiel didn't just own a restaurant. He owned racehorses, and one was named Count Turf.

Count Turf was of royal blood. His grandsire, Reigh Count, won the Kentucky Derby, and his sire, Count Fleet, won the Triple Crown.

Count Turf, however, was so ill-fancied that even his trainer, Sol Rutchick, didn't go to the Kentucky Derby. Count Turf didn't know that, and didn't know he was lumped in as a face among the mutuel field.

Along the way, Amiel and Dempsey became friends. In the mid-1950s, Amiel sold the Turf Restaurant and went in as co-owner of Jack Dempsey's. He also named a few of his horses after Dempsey, including a 1956 son of Count Turf he named Manassa Mauler.

Manassa Mauler didn't look like a stakes horse in 1958. He was a claimer. Trainer Pancho Martin and owner Emil Dolce, another restaurateur, dropped a $12,500 claim for him.

Heading into the 1959 Wood Memorial, Manassa Mauler looked more like the claimer whose connections were taking a shot than the stakes horse they may have hoped for. Just a week before the Wood, Manassa Mauler was beaten 24 lengths in a Gotham Stakes so sloppy that the AP's photo featured not only the top two finishers, Atoll and Intentionally, but also their perfect reflections in the water collected on the track.

The public gave him as much regard in the Wood as most gave his sire in the Kentucky Derby. Manassa Mauler went off at 63-1, but Ray Broussard got him rolling up the inside into a fast pace. He ran down favored First Landing to win by three-quarters of a length, which sparked headlines about how a horse not even eligible for the Kentucky Derby had just won the Wood.

Though the Wood was the biggest race Manassa Mauler ever won, he shared both his namesake's modest beginnings and his toughness. He won six more stakes for Martin and Dolce, with his last the 1963 Valley Forge H. at Garden State Park. He won 15 of his 66 races and earned more than $350,000 — much better than the average $12,500 claim, even 60 years later.

It turned out to be good luck for Count Turf babies to be named after Dempsey. He didn't excel at stud, but he sired two stakes winners. His best was Manassa Mauler. The other, who won the 1964 Los Feliz S. at Santa Anita? He was named Little Manassa.