At the Belmont this Saturday, some of the greatest jockeys in the world will be riding. Kent Desormeaux, John Velasquez and Javier Castellano are all known to U.S. racing fans. All 3 have had an impact on the biggest races in North America.

But the most accomplished jockey on a horse at the Belmont won't be an American rider. That rider is Yutaka Take, the Japanese legend who will ride Lani, one of only 2 horses in the Belmont, Preakness winner Exaggerator is the other, that will have run in all 3 legs of the Triple Crown. Take isn't well known to horse racing fans outside of Japan and Europe.

He's been riding since 1987. He had won 100 races by his second year riding. He won 69 races in his rookie year. He's won some of the biggest races in Japan, the United Arab Emirates, Great Britain, France and Hong Kong. See below for 3 of Take's biggest wins aboard 3 of his most famous mounts.
2006 Japan Cup - Deep Impact - Deep Impact won the Japanese Triple Crown in 2005. He was sired by Japan's most important stud horse, the brilliant Sunday Silence, and came from Wild In Her Hair, a broodmare that had finished second in the Epsom Oaks and was a Group 1 winner. How good was Deep Impact?  Not only did he win the Japanese Triple Crown, the Satsuki Sho, the Tokyo Yushun and the Kikuka Sho, in 2005, but he also won the Arima Kinen, along with the Japan Cup in 2006. Deep Impact is one of Japan's top sires.

Yutaka Take's ride aboard Deep Impact in the Japan Cup shows what an incredible jockey he is. He knew that he had the best horse in the race. Instead of keeping the horse inside, like what he does aboard Stay Gold in the next race that I look at, he took Deep Impact wide. The  horse didn't disappoint as Take and Deep Impact beat the well-known Ouija Board who finished third. This is who Take is, a brilliant jockey that understands how to ride every horse no matter the race.
2001 Dubai Sheema Classic - Stay Gold-In addition to winning the Hong Kong Vase in 2001, Stay Gold won the Dubai Sheema Classic that same year. Fantastic Light was a huge favorite and Frankie Dettori above Fantastic Light appeared to have the race won. At 33 to 1, Stay Gold had no business even touching the awesome Fantastic Light. The win was all Yutaka Take. His patient ride on the rail throughout almost the entire race is what led to the huge upset. Take knows where the wire is in this race. He has an awesome feel for when to kick Stay Gold into gear. All racing requires some luck. With Take, the ability to turn that luck into winning rides is what makes him great.
2007 Dubai Duty Free - Admire Moon - Japan's 2007 Horse of the Year, Admire Moon dominated his rivals in the 2007 Dubai Duty Free. Admire Moon also won the 2007 Japan Cup. Unlike Stay Gold and Deep Impact, who were both sired by Sunday Silence, Admire Moon's dad was the well-regarded American horse Forty Niner, who finished second to Winning Colors in the 1988 Kentucky Derby. 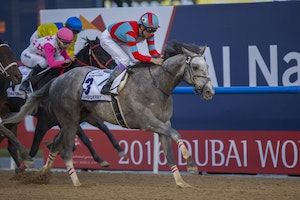 Does Lani have any shot  in the Belmont Stakes on Saturday, June 11? Who knows?  He finished a fast closing 5th in the Preakness Stakes. He is bred well and he's trained well. He'll also have one of the greatest jockeys in the history of the sport, Yutaka Take, on his back. Take might pull a huge upset aboard Lani, ala Stay Gold in the 2001 Dubai Sheema Classic, in Saturday's Belmont Stakes.