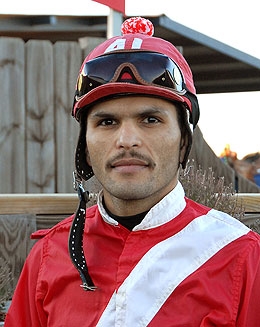 Quarter Horse rider Alfonso Lujan is closing in on his 2,000th career win

Quarter Horse jockey Alfonso Lujan is fast approaching a huge career milestone. According to American Quarter Horse Association (AQHA) records, as of February 4, the 38-year-old rider was just eight wins away from his 2,000th lifetime win.

Lujan was born in Pecos, Texas and made his riding debut when he was 19. The first few years were lean, to say the least, but Lujan was never impatient in honing his craft.

Citing the late Jacky Martin as his role model, Lujan began on the Texas circuit, riding at Manor Downs, Sam Houston Race Park and Lone Star Park. He had his first stakes win in 2000 aboard Easy Winning Jet in the $107,000 TQHA Sires Cup Futurity at Sam Houston Race Park. Texas racing was good to Lujan, but like many of his peers, he made the move to Louisiana for more race dates and better purses. The move paid off; his wins increased and leading rider titles at Delta and Evangeline followed and in 2008, Lujan eclipsed the $3 million mark in earnings for the first time in his career.

He is currently riding at Louisiana Downs and with trials for the Mardi Gras Futurity and four race days a week through March 23, he will likely win his 2,000th win in Shreveport. He will cherish the moment and share it with his family and fellow riders. With the exception of being away from his family, he truly loves what he does.

"It's in my blood," acknowledges Lujan. "When you have a powerful athlete beneath you, there's no describing the feeling. All I can say is that it sets my mind free when I get on a fast horse."
Racing
Loading...