This will be a big weekend for Quarter Horse jockey Cody Jensen. The 41-year-old rider will have multiple opportunities to qualify a horse for the rich $3 million All American Futurity with trials set for Friday, August 19 and Saturday, August 20 at Ruidoso Downs. 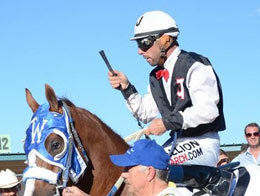 Jensen ranks fifth on the All-Time Leading AQHA jockeys with over 1,500 wins and  mounts who have earned more than $34 million in his 14 years as a professional rider.  He has two wins in the prestigious All American Futurity, guiding Teller Cartel in 2005 and No Secrets Here in 2006.

His chances for a third title look promising as he will ride A Revenant in Friday's fifth trial. The well-bred colt won the $1 million Rainbow Futurity (G1) last month at Ruidoso and is the top-ranked 2-year-old in the AQHA Poll. Should he record on the five fastest clockings of the day, he will return on Monday, September 3 for his chance to take home the $1.5 million check. He has ten mounts on Friday between trainers Mike Joiner and John Stinebaugh.

Well liked and respected by many horsemen, including Joiner, who trains A Revenant, Jensen is also considered one of the toughest riders in North America.  He has rebounded from numerous serious injuries including nine concussions, broken jaw, broken back in seven places, broken pelvis and knee and femur surgeries.

His wife, Amy, is always there for support and as a couple, they are very involved in charitable work to assist injured riders and backstretch workers.

Good luck to Cody and each of the talented Quarter Horse riders this weekend at Ruidoso Downs and racetracks across the country!