Jockey Esgar Ramirez is preparing for a very busy weekend at Ruidoso Downs. The New Mexico racetrack wraps up its annual live racing season on Labor Day with the running of the $3 million All American Futurity (G1).

Ramirez, who qualified three 2-year-olds to the final of the rich Quarter Horse race, opted to pilot fastest qualifier Imperial Eagle in Monday's final. The gelded son of One Famous Eagle is trained by Tony Sedillo and ran his 440-yard trial in a speedy :21.499 seconds.

The draw for the All American Futurity is set for Thursday, but Ramirez has one advantage of several of the riders; he won the Grade 1 event in 2010 with Mr. Piloto.  The Mr Jess Perry colt broke from the far outside post, springing the upset at 22-1 over a field which included Jls Mr Bigtime, Dominyun and Prospect to the Top. 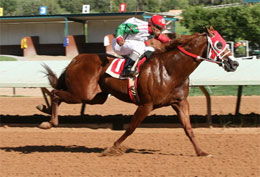 "He was wide, but moving very well," recalled Ramirez. "Out of the corner of my eye, I saw the seven (Dominyun), but I never got anxious."

It is the dream of every Quarter Horse rider to win the All American Futurity, and to this day, Ramirez is still moved by the memories of that Labor Day afternoon.

"I could not believe I had won it," he stated. "There are no words to express what I felt and what winning the All American meant to me."

The 32-year-old Ramirez is no stranger to success.  He was the sixth-leading AQHA rider in 2015 and is  closing in on 100 stakes wins with scores in each of the New Mexico tracks, Los Alamitos, Sam Houston Race Park and Prairie Meadows. Last November, he guided Daytona B to victory in the $350,000 Bank of America Challenge Championship (G1) at Lone Star Park. One of his most memorable mounts was Arealstraitheart, winner of the 2005 Zia Futurity and 2006 All American Derby.

Other riders expected to ride in the 2016 All American Futurity include Cody Jensen, Larry Payne, Jaime Leos and Eduardo Nicasio. It was recently announced that AQHA Champion jockey G. R. Carter, will return from retirement to ride for trainer Toby Keeton.  Carter, who has ridden in 18 All American Futurities, won with Falling In Loveagain in 1998 and Stolis Winner in 2008.

But this could very well be the year for Esgar Ramirez. With over 8,770 mounts and $30 million in purses earned, he has no reason to feel pressure. On Labor Day he may have a major reason to celebrate!
Racing
Loading...