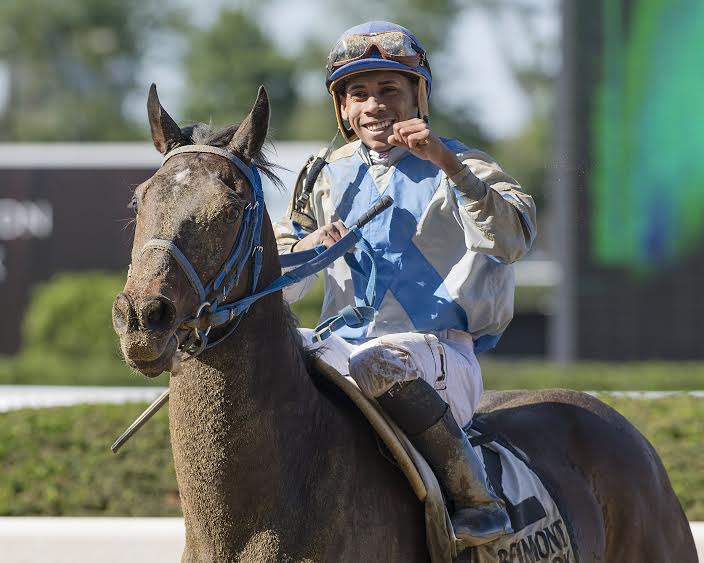 Manuel Franco started riding in 2013. He rode so well as an apprentice jockey that he was a finalist for the Eclipse Award for Outstanding Apprentice Jockey in 2013. Victor Carrasco won the award. But, it's been Franco who has made an impact on the New York Racing Circuit.

It's only a matter of time before this young jockey starts winning graded races all over the country. Check out 4 of Manuel's most impressive graded stakes wins so far in his short career.

What I love about Manuel Franco's ride on Far From Over in the 2015 Withers Stakes is that he didn't panic. Thoroughbreds are sensitive animals. If the jockey panics aboard the horse, the horse is going to know it. By not panicking, Franco allowed Far From Over to settle into stride. Then, when Franco gave Far From Over his cue, the equine responded. Franco showed an innate ability to communicate with Far From Over in this race. Wow.

Manuel gave a more traditional ride aboard Sunny Ridge in the 2016 Withers Stakes. He allowed Sunny Ridge to settle off Vorticity before making a move around the final turn. What's impressive about this ride is how Franco didn't either press Vorticity along the backstretch, or try to save ground. He trusted that he could get by Vorticity around the final turn even though the first quarter was run in a dawdling :24.56. This was yet another terrific ride by the young jockey.

Joking went off third choice in the 2016 Grade 1 Vosburgh behind X Y Jet and Holy Boss. The pace helped Joking, no doubt. But, Manuel still had to make his move at the perfect moment for Joking to get up in time ahead of Stallwalkin Dude and Weekend Hideaway. This race shows Manuel's impeccable timing. If Franco's timing had been off on Joking, the best he may  have done was finish third.

Notice how Manuel holds Yellow Agate in the fist quarter-mile of the 2016 Frizette Stakes? He just knows that the rest of the field is going much too quickly. Decisions like that are what makes great jockeys great.

Franco isn't a great jockey yet. He's much too young to be considered a great jockey. But, he's well on his way to becoming one of the greats because he provides rides like the one he gave on Yellow Agate in the Frizette Stakes.

I can't wait to see what Manuel Franco accomplishes in the future!