On June 9, Mike Smith got himself a Triple Crown. The hall of fame race rider has been winning since 1982. Smith only had 317 mounts that year. Not surprisingly, he scored with 36 winners. That's an 11% win rate. He finished second 35 times while he finished third 34 times. Smith's mounts finished in the money over 33% of the time. Not bad for a 16-year-old kid, right?

We know what happened after 1982. Smith started to routinely win on everything he rode. As of June 14, 2018, Mike Smith has ridden 5,464 winners from 33,105 mounts. That's pretty damn impressive. Because he's the regular rider for Justify, Smith could absolutely pad those stats in the next few months.

Plus, who knows who else trainer Bob Baffert's got in his barn that he wants to put Mike Smith atop? With all that being written, I thought it might be a good time to check out my 5 favorite Mike Smith rides.

Mike had taken Lure 5 wide around the first turn. Not only that, but he ended up running the half mile in a ridiculous :45.4. It was Lure's second straight BC Mile victory. The ride was classic Mike Smith, do whatever it takes to get the lead, then nurse on the lead as much as possible. The win aboard Lure in the 1993 Breeders' Cup Mile is also indicative of Mike Smith's main philosophy:  no matter what, trust your horse. 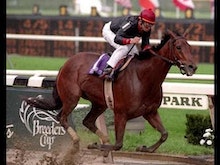 Smith took the lead with about 5 furlongs left. It was a hugely gutsy move because the quarter was run in a bit over :22. When Mike asked Inside Information the question, she answered beautifully. She buried what, at that time, was one of the most highly contested Breeders' Cup Distaff fields of all time. Not only did Smith and Inside Information beat Serena's Song, but they also beat stablemate Heavenly Prize.

Trained by the great Paco Gonzalez, Came Home went off at 12/1 to win the 2002 Pacific Classic. Derby and Preakness winner War Emblem was 6/5 in the race. Milwaukee Brew was 7/2 while a very good horse named Momentum was at 5/1. Mike showed that he could be patient aboard a horse. By staying patient, and once again providing a perfectly timed move, Smith brought Came Home first for the huge upset victory.

It's awfully tough to win a 1 1/2 mile race on a :46.66 half-mile pace.  That's what Mike Smith and Palace Malice did in the 2013 Belmont Stakes. At the top of the stretch, it appeared as if Preakness winner
Oxbow and Palace Malice had run each other into the ground. Todd Pletcher trained Revolutionary had a ton left in the tank. Orb, the Kentucky Derby winner, was in full stride. The more Mike asked from Palace Malice, the more he gave.

Smith rode the best race he could aboard Palace Malice. Then, while Oxbow appeared to tire and the closers came, he muscled Malice home to a Belmont Stakes win.

Mike trusted that he could get to California Chrome. That's called trusting your horse because Chrome got an easy lead. Smith got within 2 lengths of Chrome. When Victor Espinoza aboard Chrome pushed forward, Smith remained patient. At the top of the stretch, it sure appeared as if Victor and Chrome were gone. Then, Mike got to work. With less than a furlong left to run, Chrome was fully ahead of Arrogate. I'm still amazed how Mike Smith got Arrogate past California Chrome.