Great jockeys are hard to find. Often times, when a jockey becomes great, that jockey will ride for a long time. That's the case with the four jockeys that I've detailed here. All four of the jockeys below are known to horseplayers and horse racing fans alike.

The 53-year-old Stevens is one of the most decorated  of all time. He took a brief respite from racing after playing George Woolf, to rave reviews, in Seabiscuit.  Ever since he's returned to the races, Gary's been close to unbelievable. In 2013, his first real return to riding since 2005, Gary's mounts won an unbelievable $11,910,748. Not bad for at the time a 50 year old man. He's not too shabby as a 53 year old either. From 203 starts as of August 13, Stevens has 25 first place, 34 second place, and 29 third place finishes. What's more impressive is that he's winning at 17% with 33% of his mounts finishing in the money at the current Del Mar meet. Stevens is definitely holding his own where the Turf Meets the Surf.

The great Mike Smith's mounts have earned $10 million or more every year since 2012. This includes riding 114 winners in 2014 that earned close to $14.5 million. Smith won 3 Breeders Cup races in 2013:  the Marathon with London Bridge, the Juvenile Turf with Outstrip, and the Turf Sprint with Mizdirection. So far, the brilliant Smith has won 10 graded stakes races in 2016. He won the Suburban and Oaklawn Park with Effinex; the San Felipe with Danzing Candy; the Charles Whittingham with Si Sage and the Honeymoon with Cheekaboo. Aboard the unbeaten Songbird, Smith has won the Santa Ysabel, the Summertime Oaks, the Las Virgenes, the Santa Anita Oaks and the Coaching Club American Oaks already in 2016.  And, we're only half way through August!

Some may think that Stewart Elliott is a journeyman jockey. I don't think so. He almost broke the Triple Crown curse 11 years before Victor Espinoza did. Elliott's rides aboard Smarty Jones in the 2004 Kentucky Derby, the Preakness and, yes, even the Belmont, were breathtaking. What horse racing fans must remember is that Smarty Jones wasn't thoroughbred royalty. Unlike Pharoah, who was bred to be a champion, Smarty burst onto the scene as a diminutive, blue-collar, fighter. He had more heart than any other horse in 2004. Elliot's mounts have won over $1.15 million this year. He's holding his own currently on the competitive Southern California Circuit. That says a lot for a jockey that's over 50 years old. 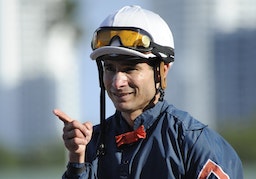 Alex Solis rode three of my favorite horses of all time. In 1997, he rode Captain Bodgit to a second place finish in the Kentucky Derby. Gary Stevens aboard Silver Charm beat the Captain in that classic Run for the Roses. In 1998, Alex came back with a terrific ride aboard Victory Gallop on the First Saturday in May. Victory Gallop almost beat Real Quiet for the Roses. Solis also rode Megahertz, an absolutely brilliant turf filly. Trained by Bobby Frankel, Megahertz was about the size of a pin drop compared to the horses she routinely beat on the racetrack. As tiny as she was, Solis always found a way to get her to explode on the track. She had one of the greatest kicks on turf that I've ever seen. Alex has won 3 graded stakes races this year. He won the Midnight Lute Stakes aboard San Onofre. He took home the Megahertz Stakes (which was fitting!) aboard Keri Belle. He won the Senorita Stakes aboard Stays in Vegas.

Who says that the older you get, the worse things get?  Gary Stevens, Mike Smith, Stewart Elliott and Alex Solis are aging like fine wine. They're riding like the champions that they are. Keep it going, fellas!
Racing
Loading...