JockeyTalk360: Julien Leparoux Rules the Arkansas Derby, Honored as Jockey of the Week 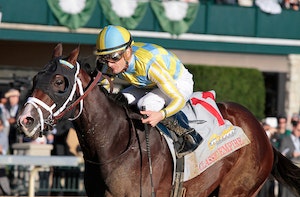 After his performance in the Arkansas Derby and leading all North American jockeys by earnings, Julien Leparoux was named Jockey of the Week for April 10-16, 2017. The award is voted on by a panel of experts for riding accomplishments by members of the Jockeys’ Guild, the organization which represents more than 950 riders in North America.

The last two Kentucky Derby prep races of the season were held on Saturday; however, only the $1,000,000 Arkansas Derby (G1) at Oaklawn offered enough points to guarantee a spot in the starting gate on the first Saturday in May. As such, a full field of 3-year-olds scrambled to collect their final Derby points.

Classic Empire was no exception. The Mark Casse trainee was just shy of cracking the top 20 as of Saturday and could not afford to finish off the board.

With regular rider Julien Leparoux aboard, Classic Empire ($5.80) bobbled and steadied early in the race, was often forced to run wide, and was asked in the stretch before dueling with and defeating the pace-setting Conquest Mo Money by half a length.

Leparoux has ridden Classic Empire in all but one start. Together, the pair has won five races, four of which were graded stakes. Saturday marked their third win in a Grade 1 event and Leparoux’s first victory in the Arkansas Derby.

Leparoux was a neck away from winning two Grade 1 races in two days and at two tracks, as he and Heart to Heart were caught at the wire by Javier Castellano and American Patriot in the $300,000 Maker’s 46 Mile at Keeneland on Friday.

Last week, Leparoux led all North American jockeys by total earnings, earning over $800,000 in 16 starts. He also led by stakes earnings, with $666,250 earned in his Arkansas Derby victory and his second-place finish in the Maker’s 46 Mile. He ended the week with a 31% win rate and maintained a 56% rate in the money, with five wins, one second, and three third place finishes.

The two-time Eclipse award winner is sixth among North American jockeys by earnings this year, increasing his 2017 total to $3,977,227 in 231 starts.

He currently leads the 2017 Keeneland spring meet by earnings and is second behind Joel Rosario in wins. Leparoux has won multiple Keeneland riding titles, most recently in the 2016 fall meet.

Though Leparoux has not yet won the Kentucky Derby, he has had a mount in the race in all but one year since 2007. He has finished fifth in the race on two occasions, in 2007 with Sedgefield and in 2015 with Danzig Moon.

Classic Empire, by Pioneerof the Nile, out of the Cat Thief mare Sambuca Classic, is owned by John Oxley. The Eclipse Award 2016 Champion 2-Year-Old colt sits in second place on the Derby leaderboard with 132 points.

JockeyTalk360.com spotlights the riders across North America and around the world who may be the bravest, toughest and most accomplished of all athletes. The Shuffle Bean Coffee Jockey of the Week is selected by a vote of representatives of America’s Best Racing, the Daily Racing Form, Equibase, the Jockeys’ Guild, the Paulick Report, the Thoroughbred Daily News, National Thoroughbred Racing Association, National Turf Writers and Broadcasters, Horse Racing Nation, Thoroughbred Racing Associations, and Turf Publicists of America.
Racing
Loading...