The Texas-bred son of Winners Award, co-owned by trainer Brian Stroud and his wife, Dana, earned his berth into the 400 yard stakes off his victory in the 2015 Zia Park Championship (G1). Jrc Callas First ran fourth in last year's edition of the stakes, but his connections look for a better result on Sunday.

"He broke a little tardy last year," Stroud commented. "This year he is breaking a whole lot better; we took the flipping rig away and it's made a difference."

Regular rider Damian Martinez will be aboard the bay gelding, who will make his 25th career start at Sunland. He has won 15 races to date with career earnings of $479,931.

His nine rivals include Mad About the Moon, runner-up in the 2014 All American Futurity at Ruidoso Downs; Hobbs America Futurity champion, Takiana Romanova; Jess Featureme Quick, runner-up in the Sunland Championship Challenge and Zoomin Effortlessly, who has won five in a row, including the Refrigerator Handicap at Lone Star Park 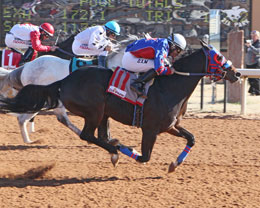 Past winners of the Championship at Sunland Park include A Ransom, Streakin Sin Tacha, First Moonflash, Cold Cash 123 and Prospect to the Top.