The field is set, the post positions have been drawn, and the countdown to the 144th running of the Kentucky Derby Presented by Woodford Reserve (gr. I) continues.

One of the final factors that bettors will consider while handicapping the Derby is the morning line odds, which attempt to estimate how the public will bet the race. While the morning line odds are never a perfect match with the post time odds, they usually provide a solid glimpse at how the wagering will unfold, giving handicappers an opportunity to see which horses they might be interested in betting.

With this in mind, I have compiled a chart of my “fair odds” for every horse in the 2018 Kentucky Derby field—in other words, the prices that I believe represent their chances of winning the race. If my fair odds for a given horse are lower than the morning line odds, then in my opinion, that horse is an overlay and represents value. In contrast, if my fair odds are higher than the morning line odds, then I think the horse in question will be an underlay and represent poor betting value.

Here’s how I break down the field: 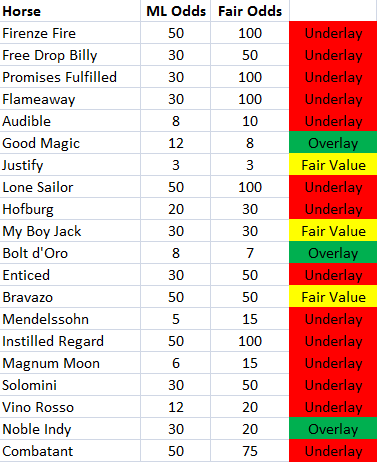 As you can see, I have just three horses in the Derby field listed as overlays based on their morning line odds: Good Magic, Bolt d’Oro, and Noble Indy. Good Magic in particular could be appealing if he starts at 12-1, since I have him pegged as my third choice at 8-1.

Three more horses offer fair value—their morning line odds match my fair odds. They are Justify, My Boy Jack, and Bravazo, though the latter two are significant longshots both on the morning line and on my fair odds line, so just because they’re fair value doesn’t necessarily mean that they’re appealing win plays.

Some might argue that listing Justify as fair value is a bit aggressive given how inexperienced he is, but his 3-1 odds represent a 25% chance of winning, and if this Derby were run four times I definitely think he’d win at least once, if not more than once. His speed figures tower over those earned by his rivals, and he’s drawn well in post position seven. I would be happy to bet him at 3-1.

I have the remainder of the Derby contenders listed as underlays of varying degrees, most notably Mendelssohn, who will attempt to become the first UAE Derby winner to prevail in the Kentucky Derby. However, the Florida Derby (gr. I) winner Audible isn’t far off of being fair value (I have him listed at 10-1 compared to 8-1 on the morning line), and it’s certainly possible that he could drift up in the actual wagering, making him a more enticing play.

It’s also important to note that my fair odds line applies only to the chances of each horse winning the Derby; it does not apply to their chances of finishing in the superfecta.

Which horses do you think represent fair or better value in the Kentucky Derby?