We are officially less than two months away from the first Saturday in May. The 2-year-old of the year, Bob Baffert’s trained American Pharoah, makes his 2015 debut in the Grade 2 Rebel Stakes on Saturday. If you don’t have Kentucky Derby Fever yet, you’re likely to after American Pharoah pummels his competition in the Rebel at less than 1 to 2 odds.

So many changes have already happened on the Derby Trail. Horses that were favored just three short weeks ago, Texas Red, Ocho Ocho Ocho, and Daredevil are starting to look longshots win. In the case of Texas Red, some are looking like longshots to even make the race. Horses like Royal Son, Metaboss, Materiality and Bolo have thrown their hats into the Kentucky Derby ring. Such is the case with the Run for the Roses where fortunes come and go with every passing day.

But, there have been a few great horses that have failed on Derby Day only to dominate the Triple Crown. Below is my Top 5 list. 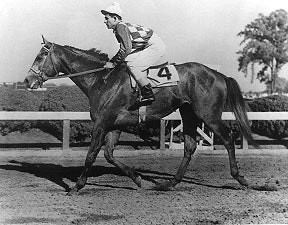 2. Damascus, 1967 – The noise and crowd seemed to get to Damascus in the 1967 Kentucky Derby where he finished third. That’s too bad because Damascus was easily the best horse of that year. He won the Preakness and Belmont. That year included Dr. Fager and Buckpasser, both of whom Damascus dominated in the 1967 Woodward Stakes. Many consider the 1967 Woodward Stakes the Race of the Century. Damascus beat both of those hall-of-fame horses by 10 lengths.

Damascus finished with a record of 21-7-3 out of 32 races and sired 71 stakes winners before being pensioned in 1989. After the Kentucky Derby defeat, they gave Damascus a stable pony to calm him down. Too bad that stable pony wasn’t present on the first Saturday in May.

3. Risen Star, 1988 – Trained by Louie Roussel III, who still trains and owns horses in Louisiana, Risen Star gets the nod after Damascus and Native Dancer because he is the most successful progeny of the great Secretariat. With a record of 8-2-1 out of 11 starts, Risen Star never finished off the board. Unfortunately, the lone third place finish was in the Kentucky Derby.

All that Risen Star did after finishing third to Winning Colors in the 1988 Derby was to beat Winning Colors and Private Terms in the Preakness Stakes by 1.5 lengths. Then, he dominated the Belmont by 14.75 lengths. Oh, what could have been if Eddie Delahoussaye wasn’t forced to take Risen Star wide on the backstretch in the 1988 Kentucky Derby. 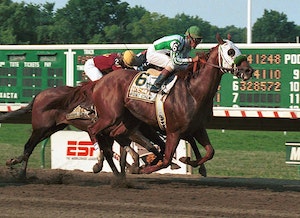 4. Point Given, 2001 – The Bob Baffert trained Kentucky Derby favorite is one of only five horses to win the Preakness Stakes, Belmont Stakes and Travers Stakes. The other four are Man o’ War in 1920, Whirlaway in 1941, Native Dancer in 1953 and Damascus in 1967. Point Given is also the only horse in history to win four $1 million dollar races in a row: the Preakness, the Belmont, the Haskell Invitational and the Travers. He garners fourth place on my list, even though he finished fifth in the Kentucky Derby, because he was the most dominant three-year-old I’ve ever seen run. 2001 was a good year for three-year-olds with Monarchos taking the Derby along with Congaree, A.P. Valentine and Millenium Wind all participating in the Run for the Roses. Point Given was better than all of those horses by a wide margin.

To this day, Bob Baffert carries Point Given’s Derby loss on his shoulders. He swears that if he had put a third prep into Point Given, “T-Rex” as Baffert called him prepped only twice, Point Given would have won the Derby and the Triple Crown. It's hard to argue with Bob.

5. Afleet Alex, 2005 – Coming off of a record 8 length victory in the Arkansas Derby in 2005, Afleet Alex was one of the favorites on the First Saturday in May. Regular rider Jeremy Rose took Afleet Alex to a dead rail and the horse finished third behind Giacomo, who won the Derby at 50 to 1 odds. Rose admits that he didn’t give Afleet Alex the best ride of the horse’s life.

But, Rose and Afleet Alex came back in the Preakness Stakes after Afleet Alex almost went to his nose and Rose was almost thrown from his back. The Belmont Stakes was a walk through as Afleet Alex ran the final quarter in :24.4 seconds. He won the Test of Champions by over 7 lengths. Afleet Alex sired Texas Red, last year's BC Juvenile winner. He also sired Materiality, who some consider Todd Pletcher's top Derby prospect after Carpe Diem now that Khozan has been sidelined.