In the Kentucky Derby  it makes sense to think about the field from a different perspective than the most traditional.

Many horseplayers, including guys like my brother, are already handicapping the race. I prefer to look at every Kentucky Derby from the basis of understanding the archetypes. An archetype, in Jungian psychology, is a collectively inherited unconcious idea.

Over the years, horseplayers and horse racing fans have created numerous archetypes in America's most famous horse race. We then attach horses in the year's Kentucky Derby field to each one of those archetypes. There's probably a lot more than what I've displayed below. If so, send in a comment or two about the archetypes that you notice.

Characterized most chiefly by a horse like Secretariat in 1973, the Monster is that one equine that shouldn't lose no matter what. This year's Monster is American Pharoah, the Bob Baffert trained two-year-old from a year ago who absolutely demolished a group of his peers in the Arkansas Derby in his final prep for the Derby.

The Baffert trainee, and likely 8/5 chalk on Derby Day, has all the makings of a Monster, but Monster horses rarely pan out in the Derby. Empire Maker, Point Given, and most memorable, Arazi in 1992, didn't win the Run for the Roses.

With this archetype, you've got a horse that just wins. The horse doesn't always look great winning the Kentucky Derby, but he or she pulls it off, somehow, someway. Seattle Slew didn't exactly blow them away in 1977, but he was easily much the best. Maybe, Slew could have won by 10 lengths, but he ended up winning by about 2 lengths. It wasn't eye-popping brilliant, but it was still a great performance.

This year's Kentucky Derby Just Does Enougher is Dortmund, another Bob Baffert trainee, Dortmund may not be as popular of a choice to win the Derby on May 2 as American Pharaoh, mainly because he's not exactly pretty when he runs, but he's definitely got a huge shot. Not only is he undefeated, but he seems to prefer a battle. Check out this year's Bob and Beverly Lewis to see what a fighter Dortmund is. Like Monsters, Just Does Enoughers can fail in the Derby as well. What if Dortmund's "just does enough" isn't enough on the First Saturday in May?

Remember Curlin in the 2007 Kentucky Derby? He was the morning line favorite to win the race. He checked in third and ran about as well as anybody truly could expect since he hadn't run as a two-year-old. But, he was the "hot horse". Curlin didn't have enough seasoning to win the Run for the Roses, but he ended up being one of the best race horses to run in the past 10 years.

This year's Hot Horse is South Africa's Mubtaahij. The winner of the UAE Derby in March, Mubtaahij appears well-suited to put in a great Derby run. Or, he could simply fail miserably. It all depends on if his victories over dirt were legitimate or Mubtaahij was just beating up on soft competition. 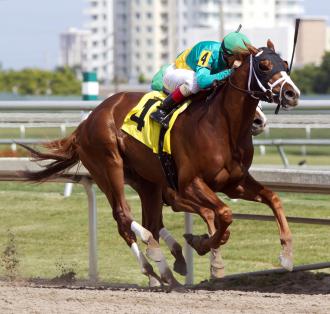 The most important thing about the Race Falls Apart Pick is that nobody believes that the colt or filly can win. Another name for the Race Falls Apart Pick archetype is the Where Did That Horse Come From pick. Or, the Damn, Now I Have to Tear Up All of These Ticket Picks. This year's Race Falls Apart Pick is Keen Ice. Keen Ice sneaks into the field with 22 points following the withdrawal of  Madefromlucky, though he has been no better than third in his three Derby preps. A month ago, few would have thought this son of Curlin, trained by Dale Romans and ridden by Derby winning jockey Kent Desormeaux, could possibly make the field.  That doesn't mean he won't win it.

The best example of the Forgotten Horse are Funny Cide in 2003, who finished second to Empire Maker in that year's Wood Memorial, and Thunder Gulch in 1995. Everybody forgot to bet on Thunder Gulch to win the Run for the Roses. He went off at 25-1 odds.

This year's Forgotten Horse is likely to be Upstart. Trained by Rick Violette, Jr., Upstart won the Holy Bull Stakes and the Fountain of Youth before finishing second to Materiality in the Florida Derby. He got taken down in the Fountain of Youth. Technically, he finished second in that race. Upstart could easily be riding a three race winning streak going into the Kentucky Derby. He could offer big odds and come up huge, like Thunder Gulch did in 1995.