Kentucky Derby Maiden Watch: Is Casse's Determinedly the next War of Will?

'All others' favored in KDFW Pool 2, Sire Future Wager

'All others' favored in KDFW Pool 2, Sire Future Wager

The mutuel field of “All other three-year-old colts and geldings” closed as the 4-5 favorite in Pool 2 of the Kentucky Derby Future Wager conducted over Thanksgiving weekend.

There are two strategies that look to be worth using for Pool 2 of the 2023 Kentucky Derby Future Wager.

Kentucky Derby Maiden Watch: Will McGaughey's colt become the Talk of the Nation?

What can we take away from the Breeders’ Cup Juvenile as we head toward the Kentucky Derby?

There’s only one thing standing in the way of this being the most white-knuckle, adrenaline-pumping, root-worthy Breeders’ Cup Classics of all time. And that’s Flightline.

Handicapper J. Keeler Johnson takes a horse-by-horse look at pre-entries for the 2022 Breeders’ Cup Juvenile (G1) at Keeneland, exploring the pros and cons of each contender.

Breeders' Cup Juvenile trends on the Road to the Kentucky Derby

Below we look at the last nine Juvenile winners, plus where they placed in Road to the Kentucky Derby prep races that followed and how they performed along the Triple Crown trail.

The Futurity Trophy (G1) is an important preview for next season’s Classics and part of the European Road to the 2023 Kentucky Derby series.

One of the most accomplished horses on the Road to the Kentucky Derby is Forte, winner of the Hopeful S. (G1) and Breeders’ Futurity (G1) during a productive juvenile campaign.

Santa Anita: How to bet the American Pharoah Stakes

A total of eight juveniles will travel 1 1/16 miles on the Santa Anita dirt in Saturday’s $300,000 American Pharoah S. (G1). The Breeders’ Cup “Win and You’re In” tilt will be led by four entrants from the mighty Bob Baffert barn.

Keeneland: How to bet the Breeders' Futurity

By siring the winners of the first two scoring races on the main Road to the Kentucky Derby, Good Magic has surged to the lead in the freshman sire standings.

It’s no wonder why Blazing Sevens has enjoyed success running long on the Road to the Kentucky Derby. The stretch-running Champagne S. (G1) winner has a strong pedigree for handling classic distances.

How to bet the 2022 Lukas Classic Stakes

A compact, but accomplished, field of six will vie in Saturday’s $500,000 Lukas Classic S. (G2) at Churchill Downs on Saturday.

How to bet the 2022 Champagne Stakes

A field of six juveniles will travel one-mile on the Aqueduct main surface in Saturday’s $500,000 Champagne S.

How to play the opening European Derby Road features

A week after the Iroquois (G3) began the main Road to the 2023 Kentucky Derby, the European series begins this weekend. Two well-established juvenile features, one each in Ireland and England, begin the seven-race series.

Since our initial profile of Good Magic in the freshman sires series, three of his early winners have furnished stakes updates, and several others are on the radar.

Once in a while, a Kentucky Derby (G1) contender comes along with a pedigree seemingly perfect for racing 1 1/4 miles on dirt. Such is the case with Rich Strike.

Represented by a pair of juvenile stakes winners, most notably 3 1/4-length Saratoga Special (G2) winner Damon’s Mound, Girvin is off to a fast start from his first crop.

TwinSpires Edge voters have made it clear: they’d like Mendelssohn to be one of the first-crop sires that we focus on in 2022.

Bred in Kentucky by WinStar Farm and foaled in March 2015, Bolt d’Oro got off to a fast start as a two-year-old.

Writing the stallion marketing script for Justify’s first season in 2019 wouldn’t have been the toughest task in Thoroughbred breeding.

Good Magic checks multiple boxes for stud appeal. A $1 million yearling, by a Hall of Famer and from a productive family, he developed into a champion juvenile and Grade 1-winning classic performer at three.

Introducing the First-Crop Sires Series 2022: Choose a Sire for us to Follow

TwinSpires is bringing back the First-Crop Sires Series for 2022. Last year's series included Gun Runner and Arrogate, and this season, Justify tops our list to follow closely.

Saratoga: How to bet the 2022 Jim Dandy Stakes

A compact, but fantastic, field of four three-year-olds will go postward in the $600,000 Jim Dandy S. (G2) at Saratoga on Saturday.

Betting with, and against, Mandaloun in the Stephen Foster Stakes

A fantastic field of seven will travel 1 1/8 miles on the Churchill Downs main surface in Saturday’s lucrative $750,000 Stephen Foster S.

The 2022 Triple Crown, comprised of the Kentucky Derby, Preakness, and Belmont, spans a five-week period from early May through early June. But preparations for the series begin months earlier.

Like most U.S. betting outlets, you won’t find any single bets available on a horse to win the 2022 Triple Crown with TwinSpires. But you can bet on each individual race.

How long are the three Triple Crown races?

The three races which make up the U.S. Triple Crown of Thoroughbred horse racing—the Kentucky Derby, Preakness S., and Belmont S.—each provide a test over a different distance at a different venue.

We look at some fast facts and figures about the Belmont Stakes, including records for fastest time, largest win margin, victories by a jockey, and the number of fillies who triumphed in the historic race.

When Gun Runner made an impact in 2021 like few first-crop sires ever do, it seemed inevitable that his progeny would be serious players in the 2022 Triple Crown series.

How beaten Kentucky Derby favorites have fared as Preakness favorites

A post-World War II history of beaten Kentucky Derby favorites who were also the post-time favorite in the Preakness.

How Kentucky Derby longshot winners finish in the Preakness

We look at 10 of the longest shots to win the Kentucky Derby and how they fared in the Preakness Stakes, the second jewel of the Triple Crown.

American Pharoah was the 12th Triple Crown winner, having broken a 37-year drought to win the famed trio of races in 2015.

Justify is the 13th and most recent Triple Crown winner, having achieved his milestone in 2018 in remarkable circumstances. Below are 10 interesting facts about Justify.

After a memorable weekend at Churchill Downs, highlighted by a stunning upset in the Kentucky Derby (G1), the TwinSpires.com jury is back to recap all that went on.

With the Kentucky Derby triumph, Calumet Farm will be full of enthusiasm about Keen Ice’s stallion prospects.

Sent off as the longest shot in the field at odds of 80-1, Rich Strike outran all expectations to post a stunning upset in Saturday’s 148th Kentucky Derby (G1).

The field is set for the 148th running of the $3 million Kentucky Derby (G1) at Churchill Downs on Saturday.

Speed. It’s been the dominant factor in recent editions of the $3 million Kentucky Derby (G1) at Churchill Downs. But will Saturday’s renewal of the historic race produce a different outcome?

The Jury: Bets and fades for Kentucky Derby Day

The TwinSpires Jury is ready to put their opinions to the test on the biggest wagering day of the year.

Countdown to the2022 Kentucky Derby

Learn about the 2022 Kentucky Derby

What is the Kentucky Derby? 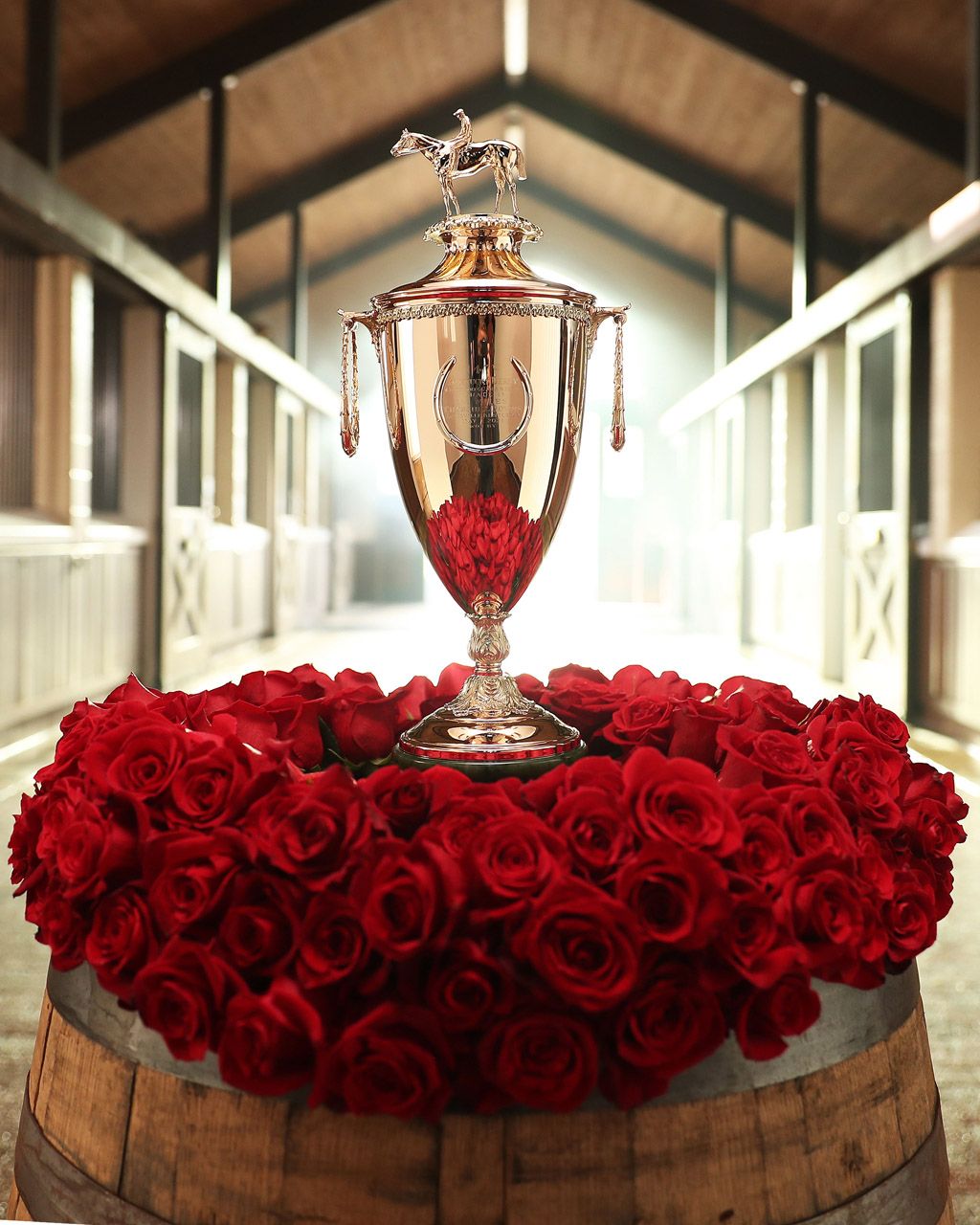 A Brief History of the Kentucky Derby

The most famous horse race in the world is the most thrilling two minutes in sport. It takes place on the first Saturday in May at the historic Churchill Downs racecourse in Louisville, Kentucky and regularly attended by more than 150,000 people. The record attendance was 165,307 in 2012, and in 2014 164,906 watched California Chrome win "the run for the roses".

The inaugural Kentucky Derby took place in 1875 after Col. Meriweather Lewis Clark, Jr had visited England three years earlier and witnessed the Epsom Derby, a famous race which had been run since 1780 on the outskirts of London. The Kentucky Derby was originally raced over the same distance of 1 & 1/2 miles as the Epsom Derby (it was changed to its current distance of 1 & 1/4 miles in 1896. An estimated crowd of 10,000 watched the colt Aristides crowned winner of the first running of the race at the newly constructed Churchill Downs racecourse.

The first live radio broadcast of the Kentucky Derby was in 1925, and it wasn't until 1949 that the first television coverage of the race happened. In 2016 the race will be covered live by NBC with real-time payouts and results from horse racing's premier event available all day on BetAmerica.com.

The race is so popular that in the preceding two weeks leading up to the running, the city of Louisville holds the Kentucky Derby Festival, Kentucky’s largest single annual event. The Kentucky Derby Festival is comprised of several events, including Thunder Over Louisville (the biggest annual fireworks display in North America), the Great Balloon Race, the Pegasus Parade (one the countries largest), and The Great Steamboat Race.

Entries into the Kentucky Derby include some of the most famous racehorses to ever compete. Notable entries into the race include Regret, Sir Burton, Gallant Fox, Omaha, War Admiral, Citation, Northern Dancer, Seattle Slew, War Emblem, and California Chrome.

Visit our Kentucky Derby Trivia page for more insights into the most famous race in the world, including detailed facts about entries, records, and winners.

View a complete list of prep-races that award points along the Road to the Kentucky Derby trail. Prep-races are valuable stepping stones for horses looking to compete on the First Saturday in May.

POLL: Who is the best Kentucky Derby winner of the 2000s?