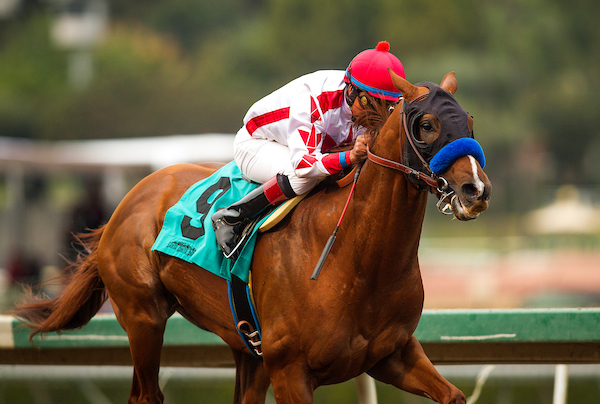 The Sham Stakes at Santa Anita Racecourse, California offers an early race for horses who recently have turned 3-years-old on January, 1st. The dirt contest awards finishing position points of 10-4-2-1 towards a possible Kentucky Derby start.

History of the Sham Stakes

The $100,000 Sham Stakes the first West Coast, 3-year-old, race of the year in which points on the Road to the Kentucky Derby table are available. The first four finishers earn points on a 10-4-2-1 basis.

Though it was originally held at 1 ⅛ miles, the current distance is just one mile. The Sham Stakes was first run in 2001 in early February. It was held in early March for three years, before moving to its current early January position in 2011.

The 2017 running of the Sham was won by Gormley, winner of the FrontRunner Stakes. Gormley narrowly defeated American Anthem in the stretch as the two matched stride for stride to the wire, leaving the rest of the field 12 lengths back over a sloppy, sealed Santa Anita track. If the silks look familiar, Gormley is owned by Ann and Jerry Moss, owners of the champion Zenyatta.

The race was named for the Thoroughbred racehorse Sham, who shadowed Secretariat during the Triple Crown season in 1973. Sham won the Santa Anita Derby that year and was second in the Kentucky Derby. His time in the Kentucky Derby is the fourth fastest in history (behind Secretariat, Monarchos, and Northern Dancer). Considering that timing in the 1970s is less precise than today, it is possible that Sham ran the second-fastest time in the Derby ever, even as a second-place finisher.

No winner of the Sham Stakes has gone on to win the Kentucky Derby as yet. However, several outstanding horses have won the race – they include two Breeders’ Cup Dirt Mile (G1) winners, Tapizar and Goldencents, the multiple grade one winners Colonel John and Gormley, and the 2017 Breeders’ Cup Classic (G1) runner-up Collected.

Past Winners of the Sham Stakes