Kiss My Hocks Primed for the All American Derby 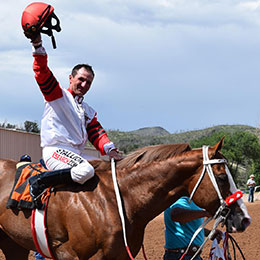 On Sunday, September 6, a sensational field of 3-year-old Quarter Horses will enter the starting gate for the $2.3 million All American Derby (G1) at Ruidoso Downs. One finalist who merits considerable attention in the 440-yard stakes is Kiss My Hocks.

The Texas-bred son of Tempting Dash has been making news in the Quarter Horse racing world since setting a new track record in trials for the 2014 Sam Houston Futurity (G2) last March. He won that race with ease and headed out to Ruidoso Downs where he dominated in trials for the Ruidoso Futurity (G1) and ran second in the Rainbow Futurity last summer.

He was honored by the American Quarter Horse Association (AQHA) as Champion two-year-old and two-year-old colt. Many 2-year-olds do not replicate their stardom in their 3-year-old campaign, but Kiss My Hocks has already won the $900,000 Rainbow Derby this summer. He was the fifth fastest qualifier in trials for the All American Derby on August 23 and comes into the final with a record of nine wins from 11 starts and earnings of $1.1 million dollars. Trained by Toby Keeton, Kiss My Hocks has been ridden by top Quarter Horse jockey G.R. Carter Jr.

The handsome chestnut colt is the leader in the AQHA Racing-Horseplayernow.com National Poll for the 3-year-old-and-older horses. And on Labor Day weekend, he could continue to rise in national prominence. The first-place check for this prestigious race is $998,920 and should he win, he would be a front-runner for AQHA Champion 3-year-old and potentially, AQHA World Champion honors.
Racing
Loading...