While many Americans might view Labor Day as the unofficial end of summer, those standardbred racing fans will look to extend their vacation as close to midnight as possible so they can partake in the action at a trio of half-mile ovals, Yonkers Raceway, Harrington Raceway and Ocean Downs.

Monday's card at Harrington Raceway offers the usual blend of talented pacers, young and old, with several looking to join the upper echelon locally and others in the Open Handicap perhaps looking to secure an invitation to the Grade I, $200,000 Bobby Quillen Memorial here on September 19. Local favorite, Wiggle It Jiggleit, the all-aged track record holder and reigning horse of the year, will likely make his lone appearance of the season in the Quillen fresh off his handy score in the Grade I, $650,000 Canadian Pacing Derby on Saturday night at Mohawk Racetrack in Canada.

In Monday's second race, a non-winners of five races or $25,001 lifetime class for five-year-olds and under, look for Focus Power (Allan Davis) to end a brief, four-race drought when he leaves from the rail. This four-year-old Shadow Play gelding trained by Joe Hundertpfund, Jr. has been second in three of his last four outings, but he has enough speed to control the tempo from the rail 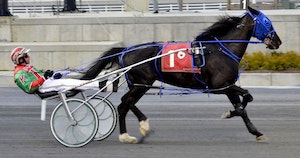 and should outlast the late bids from Live Action and Machine Team in this spot.

One race later on the card, look for Seacoast (George Dennis) to earn a modest slide when he leaves from the rail one week after drawing the dreaded eight hole. A four-year-old Rocknroll Hanover gelding owned and trained by Orville Harmon, Seacoast has only won once in 17 starts this year and just twice in 42 career outings, but this non-winners of three races or $15,001 lifetime class and the rail should be a favorable combination to find the winner's circle on Labor Day.

Then one race later in the fourth, a non-winners of $50,001 lifetime class for younger pacers, look for Triple Seelster (Victor Kirby), Renegade Bob (Art Stafford, Jr.) and Cool Reward (Tony Morgan) to settle the issue in the lane from their three inside slots. Renegade Bob has the tactical advantage with his early speed, but both Triple Seelster and Cool Reward to remain in contention throughout and make things interesting in the lane.

Then two races later in the $16,000 Open Handicap, one of the last two local preps for the Sep. 19 Quillen here, look for Dancin Yankee (Russell Foster) to regain his winning ways in his second try over the oval. An eight-year-old Yankee Cruiser stallion trained by Josh Green, Dancin Yankee rallied to get third last week from post seven and moves in several slots and should be more aggressively handled in the early stages.

Two years ago Dancin Yankee was among the best older pacers in the country, earnings over $550,000 in a campaign that virtually ended when he was tag-teamed by an uncoupled Ron Burke-trained entry in the Quillen elim. Dancin Yankee posted a 4-7-2 slate and $283,000 bankroll from 23 starts last year, but he hardly resembled the form from the previous season. He arrives in this event with a 6-7-1 slate and $87,500 banked from 21 starts this year, including a gritty win in the $50,000 Charna at Northfield Park. He boasts a stellar 52-31-19 slate and $1.465 million bankroll from 152 career outings.

Looking to upend Dancin Yankee are Special T Rocks (Jim Morand), who won this event last week in 1:51 and twice emerged victorious in the A Handicap at Ocean Downs. He sports a solid 6-4-1 slate and $53,500 bankroll from 17 starts this year and boasts 39 wins and $545,000 banked from 120 lifetime tries. Getitoffyourchest (Ross Wolfenden) was the king of the local group during the spring meet for trainer Richard Lewis, while Handsome Henry K (Dennis) raced well last week to get second.

That same evening at Yonkers Raceway in New York, the latter portion of the card offers the most playable events.

In the ninth, a non-winners of six races or $60,000 lifetime class for three- and four-year-old pacers, look for railbound Bank Shot Hanover (Brian Sears) to maintain his winning ways for owner-trainer Rene Allard. A winner against non-winners of five company last week at Pocono Downs after finishing a respectable fourth in the $200,000 Battle of the Brandywine consolation, Bank Shot Hanover has won two of his last three starts and owns a 3-3-7 slate and $63,000 bankroll from 22 tries this year.

One race later in the other half of the split condition for this group, look for railbound Art's Dragon (Mark Macdonald) to end a brief drought. A sophomore son of Dragon Again trained by Peter Fraley, Art's Dragon rallied to finish second in this class last week and now moves two spots inside. He was sixth in the Battle of the Brandywine consolation and is looking to garner his first win since July 4. So perhaps he just has a knack for posting scores on the holidays.

Monday marks the closing night card at Ocean Downs, the half-oval five miles west of Ocean City, Maryland and the beach goers will want to make one last stop at the historic venue before heading back on Route 50 West.

The seventh races, a B Handicap for pacing fillies and mares, could come down to a pair of distaffers with opposing tactics. Speedy Lyonssweetie (Jason Thompson) will look to control the tempo from post four while Shaker Rei (John Gazzerro) will look to overhaul the field from post five. Lyonssweetie is now trained by George "Ronnie" Leager of Mom's Toy fame for owner Frank Miller, Jr., of Still Pond who has since been confined to a nursing home. Shaker Rei does her best racing from well off the pace and would benefit from a lively early tempo.
Racing
Loading...