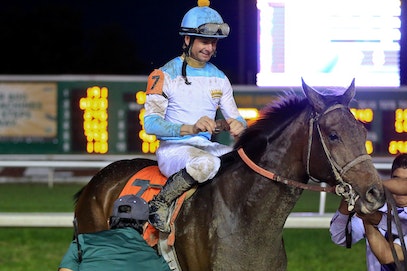 Corey Lanerie won five races on a single card at Churchill Downs, including the Grade 3 Aristides Stakes, and was named Jockey of the Week for May 30 – June 4, 2017. The award is voted on by a panel of experts for riding accomplishments by members of the Jockeys’ Guild, the organization which represents more than 950 riders in North America.

When jockey Corey Lanerie began his day on the Churchill Downs Saturday card, he had a scheduled mount in each of the 11 races, including the feature race of the day, the Aristides Stakes (G3). He ended the card not only with the graded stakes victory, but five wins in total, two second-place finishes and two third-place finishes.

His first win on the card came in the third race, an allowance optional claiming race aboard Hunka Burning Love ($24.00) in a 2 ¼ length victory. That win was the first of three consecutive wins, followed by Starlight Express ($9.80) by 2 ½ lengths and favorite Showreel ($4.60) by over five lengths.

Lanerie returned to the winner’s circle in the eighth race with Caniform ($5.40) before winning the $100,000 Aristides Stakes (G3) with Limousine Liberal ($3.20). The Ben Colebrook trainee was the heavy favorite in the six-furlong dirt event as he sought his second consecutive graded stakes win.

Lanerie’s five wins represented four different trainers and his combined margin of victory exceeded 13 lengths. He was within a length of a seven-win day, as he finished second by three-quarters of a length behind the winner in the seventh race and was beaten by only a head in the ninth.

Last week, Lanerie started in 28 races and won nine, giving him a win rate of 32%. With three second-place finishes and seven third-place finishes, he was in the money on 68% of his mounts.

His weekly earnings of $261,191 were the seventh-highest in a week that included multiple graded stakes across the country. Lanerie is currently ranked 14th by earnings among all North American jockeys for the year to date. His career earnings exceed $113 million in 28,693 starts and 4,175 victories.

Lanerie’s earnings were aided in part by his second-place finish on Lookin At Lee in the 2017 Kentucky Derby (G1), his third mount in the first leg of the Triple Crown. Lookin At Lee and Lanerie returned to run fourth in the Preakness Stakes (G1).

The Churchill Downs specialist has won 12 riding titles at the Louisville track; only Pat Day has earned more Churchill Downs titles. Lanerie leads the current meet with 41 wins and $1.8 million in earnings.

JockeyTalk360.com spotlights the riders across North America and around the world who may be the bravest, toughest and most accomplished of all athletes. The Shuffle Bean Coffee Jockey of the Week is selected by a vote of representatives of America’s Best Racing, the Daily Racing Form, Equibase, the Jockeys’ Guild, the Paulick Report, the Thoroughbred Daily News, National Thoroughbred Racing Association, National Turf Writers and Broadcasters, Horse Racing Nation, Thoroughbred Racing Associations, and Turf Publicists of America.
Racing
Loading...