The G3 Rachel Alexandra kicks off a fantastic All Stakes Pick 4 at Fair Grounds.

The race for 3yo fillies is a Kentucky Oaks prep and - though the field isn't huge at 7 runners - it's definitely going to separate the girls from the women as we see who is going to step up and be the Belle of the Bayou.

1-Army: maybe needed the first time v. winners 2-Streaming: hasn't done anything wrong 3-Shanon Nicole: always runs her race 4-Untapable: forget the Juvenile Fillies out for the trip & she's always right there 5-Got Lucky: needs to break clean but the talent's definitely there 6-Ria Antonia: has grown beautifully since the Breeders' Cup DQ win 7-Express Model: has to get the lead to prove more than just a precocious 2yo

The big question is Who's Going To The Lead? Maybe the easy way to handicap the pace scenario is to say who will not be on the front end: Got Lucky and Ria Antonia; the former really needs a clean trip to prove just how good she is, and the latter has grown up beautifully after training like an absolute beast into the G1 Breeders' Cup Juvenile Fillies, which she won after interference originally had her on the losing end of the nose bob. Also in the mix late will be Shanon Nicole, who's been best as a dead closer but needs a perfectly timed ride to get to the wire first.

Of the likely speed: there is doubt Streaming will be on the pace given her resume and she's likely to be joined by longshot Express Model and probably Untapable, a precocious daughter of Tapit who hasn't had the best of luck in recent races.

And - because every day is better with a picture of that fabulous race mare - here is Rachel Alexandra herself winning the 2009 Haskell! 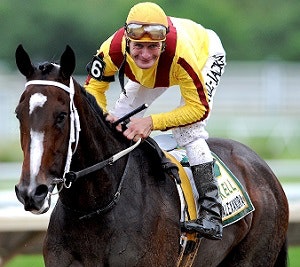