Many thoroughbred and harness racing fans are accustomed to seeing their respective sports best horses compete on weekends, standardbred fans will turn their attention to the Delaware State Fair where the half-mile oval will host the $240,000 Jugette tomorrow and $750,000 Little Brown Jug on Thursday.

The Jugette for three-year-old filly pacers on Wednesday will attract upwards of 20,000 fans and Thursday's Little Brown Jug will garner an overflow crowd of more than 50,000, but both races came up light in numbers and high in quality.

Wednesdays feature is the $240,000 Jugette, which drew only field of nine and will have a lone prelim at 3:00 and then the $145,000 final 90 minutes later. The Jugette may have come up short on quantity, but it does include six of the best sophomore pacing fillies in the land.

Division leader Pure Country (Brett Miller) drew post nine in the second tier, but this Jimmy Takter trainee rates as the favorite based on her 7-3-2 slate and $860,000 bankroll from 14 starts this year. Pure Country has already won major stakes in the U.S. And Canada and will be looking to add another lucrative score to her resume.

Two spots to her inside is Darlinonthebeach (David Miller) who owns several major stakes wins as well this season. Darlinonthebeach handed Pure Country her first career setback in May and later handed her another and now will look to play the spoiler role again while leaving from post seven.

Blue Moon Stride (Andrew McCarthy) has ample gate speed and will need all of it and then some when he leaves from post eight. She owns a 5-2-2 slate and $330,000 bankroll from just 10 starts this year, but overcoming post eight could prove a difficult task even with her speed. 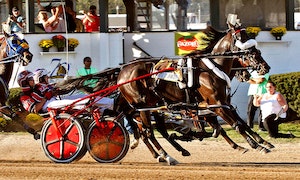 LA Delight (John Campbell) was one of the sports top two-year-old filly pacers last season, but even with six wins and $310,000 banked from 11 starts this year she has hardly resembled her freshman form.

Thursday afternoon the standardbred racing world will focus its attention on Delaware, Ohio for the latest edition of the Grade I Little Brown Jug. One of the last 'heat' races on the schedule, the Jug has also witnessed a steep drop in entries as the sport has shifted breeding priorities from durability and stamina to raw speed.

Thursdays Jug attracted only 11 starters split into two first heat eliminations, with the top four finishers returning for the $277,000 second heat. A third heat, known among racing fans as a 'race-off' could be required if neither first heat winners takes the second.

Headlining the first elimination is Betting Line (David Miller), the division leader with 11 wins from 12 starts and earnings of over $1.1 million for trainer Casie Coleman. Betting Line has won 11 straight races since finishing second in his seasonal debut and is among the short lists of contenders for harness racing horse of the year in 2016.

Looking to upend Betting Line in the Jug are three Ron Burke trainees in this split. Check Six (Yannick Gingras) has won seven of 15 starts and banked over $750,000 and is clearly best of the trio. Stolen Glimpse (Matt Kakaley) and Fernando Hanover (Tim Tetrick) are the other two Burke trainees.

Railbound Dr J Hanover has won seven of nine starts for trainer Tony Alagna and was third in the Messenger Stakes, while Lyons Snyder (Sylvain Filion) was second to Betting Line in the Simcoe and has wicked early speed.

One race later in the second Jug elimination, Racing Hill (Brett Miller) rates as the prohibitive favorite for trainer Tony Alagna. Racing Hill is the second-best sophomore in the land, sporting a 5-5-1 slate and $1.2 million bankroll from 11 starts and should dictate the tempo from post two.

Burke also has two trainees in this split, but both appear to be racing for minor spoils. Manhattan Beach (Kakaley) has won four of 16 starts and banked over $260,000, while Big Top Hanover (Gingras) owns only one won and $150,000 banked from 16 starts and is one of the divisions prime underachievers.

Rounding out the second division are Western Fame (Mark Macdonald) who leaves from the rail for Takter, while Spider Man Hanover (McCarthy) looks severely over-matched from post five with a 1-1-1 slate and $18,000 made from 10 starts for trainer Nick Surick.
Racing
Loading...