What to Look For at the 2018 Del Mar Summer Meet

The 2018 Del Mar Summer Meet begins on Wednesday, July 18. It's not too early to think about the Del Mar Meet. After all, July is right around the corner. This year's Del Mar Meet should be terrific. As always some the biggest purses in racing will be handed out.

Not only that, but trainers and owners point their most successful horses to Del Mar's summer meet. Why? The purses are gigantic. Where the Turf Meets the Surf is a west coast racing staple. This year will be no different.

Keep reading for an early preview of the 2018 Del Mar Summer Meet.

What to Look For at the 2018 Del Mar Summer Meet

There's no track in the United States that can rival turf racing at Del Mar. The 2017 Breeders' Cup proved that. Talismanic won the race as a slight underdog. He beat some pretty heady contenders like the Chad Brown trained Beach Patrol.

The Breeders' Cup won't be held at Del Mar for a long time. Still, 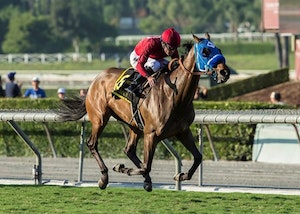 Sharp Samurai has turned into one of the better turf horses on the west coast. He's scheduled to run in the Grade 2 Eddie Read Stakes on July 22.

Sharp Samurai has a chance to become one of the best turf horses in North America. When was the last time we could say that about a horse that ran on the California grass?

The Del Mar Summer Meet is often when the best 2-year-old trainers on the west coast unleash their top horses.

This year should be no different. Expect Bob Baffert, the King of 3-Year-Old racing, to produce at least 2 Kentucky Derby future book contenders during the Del Mar Meet.

Jerry Hollendorfer might unleash a top 2-year-old filly. In 2015, Hollendorfer ran Songbird at Del Mar's Summer Meet. Songbird broke her maiden and then won the Grade 1 Del Mar Debutante. Hollendorfer waited until the Santa Anita Meet to unleash Unique Bella. Will he go back to what worked so well with Songbird?

West Coast in the Pacific Classic, Not Justify

It's doubtful Bob Baffert runs Justify in the Grade 1 Travers at Saratoga. He most likely won't run his Triple Crown winner in the Pacific Classic, either. The reason is because Baffert still trains the top handicap horse in the nation in West Coast.

Sure, West Coast failed in Dubai. So what? He should be geared up to show his best in the Pacific Classic, the crown jewel of the Del Mar Summer Meet. Along with West Coast, horses like Collected and Accelerate are both pointing to the P.  Classic. That would make this year's P. Classic one of the most competitive in recent memory.