The $150,900 Los Alamitos Winter Championship (G1), rescheduled from Friday night due to heavy rain, will run Sunday, February 19 as the last race on the Los Alamitos card. This race marks the first qualifying event to the Grade 1, $600,000 Champion of Champions, and the field is wide open. 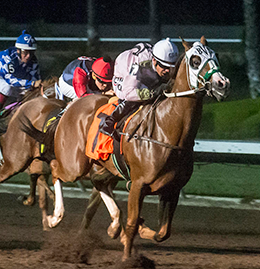 2016 Champion of Champions victor Zoomin For Spuds posted the third-fastest qualifying time and is the pride and joy of his 84-year-old owner and breeder, Jim Walker. Sent off at odds of 10-1 in the Champion of Champions, the 4-year-old Zoomin for Bux gelding is no longer overlooked by fans or horsemen. His Los Al record is impeccable with six stakes wins last year for his likeable conditioner Monty Arrossa. Drawing the rail should be no issue as he won the Z. Wayne Griffin Director Trials from that post to clinch his berth to the Champion of Champions.

BH Lisas Boy, who returned to action in trials on January 27 in fine form. Bred and owned by Bill Hoburg, the son of Mighty Invictus had a terrific 2016 campaign, culminating with a second-place finish in the $350,000 Bank of America Challenge Championship. Freshened for the year, he is now trained by John Cooper with Cesar DeAlba as his pilot. His winning trial clocking of :19.944 seconds was the fastest of the night and he was the only horse to qualify under 20 seconds. Cooper and DeAlba won the Los Al Winter Championship last year with the iconic Moonist. A win on Friday with BH Lisas Boy would be both sweet and bittersweet as the passing of Moonist last year was heartbreaking for his connections and racing fans as well.

He Looks Hot is a very capable entrant as well. Bred and owned by Ed Allred, the 5-year-old son of Walk Thru Fire won the 2014 Los Al Two Million and has never finished out of the money at the distance of 400 yards. The Scott Willoughby trainee has had “troubled trips” in five of his last six starts, but if he gets a clean trip under regular rider Carlos Huerta, look out!  His career bankroll stands at $990,835, so a victory puts this gelding on millionaire’s row!

Stevie B First Cash does not boast the Grade 1 record as some of the top contenders, but the 4-year-old son of First Down Dash out of the Spit Curl Diva mare Spit Curl Dash, has plenty of potential. Trained by Bret Vickery, Stevie finished in the top three in each of his 12 starts last year. He’s solid at this distance, and will break outside of BH Lisas Boy under Jose Alvarez.  A good break will be essential, but at 8-1, he could bring some value to this very exciting feature.  There is also an Indiana-bred in the field for the first time.  Multiple-stakes winner Megatron Harry is now in the barn of Elena Andrade and was the tenth-fastest qualifier. The son of Escondido Beach is 50-1 on the morning line, so an on the board placing would really boost the exotic wagers!

One of the premier events in Quarter Horse racing, the $600,000 Champion of Champions (G1), will be run in December at Los Alamitos. Since its first running in 1972, the 440-yard stakes has a distinguished list of legends including Charger Bar, Dash For Cash, Refrigerator and Tailor Fit.  The winner will undoubtedly be strongly considered for AQHA world champion honors, when the awards are presented next month. In the four-decade history of the Champion of Champions,  the winner has emerged as world champion 27 times.
Racing
Loading...