Open Me A Corona will attempt to close out his career a victory in the $100,000 Louisiana Champions Day Classic Stakes (RG2). The Louisiana-bred son of Coronas Leaving You has won 11 of his 13 career starts. 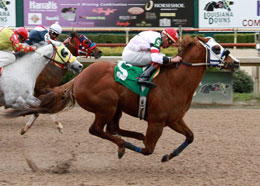 Open Me A Corona leads the field in Saturday's $100,000 Louisiana Day Classic

The 5-year-old is trained by Bobby Martinez. He will face six rivals in the 440-yard Classic, including stakes winners Heza Fast Rogue and Scooter Prize. Drawing the far outside post is Jls Mr Bigtime, who eclipsed the million dollar mark in earnings in last year's Louisiana Champions Day Classic.

An overflow field of 2-olds entered in the 350-yard, $100,000 Louisiana Champions Day Juvenile Stakes (RG2). Telarosa, a daughter of Jet Black Patriot conditioned by Kenneth Roberts Sr., has been installed as the 3-1 morning line favorite. She won the $304,000 LQHBA Sale Futurity (RG1) at Fair Grounds on September 5, at 350 yards. Micmac Warrior, was the fastest qualifier in trials for the Sale Futurity, and should be prominent under Alfonso Lujan.

Three-year-olds will compete in the third stakes of the card, the $100,000 Louisiana Champions Day Derby at 400 yards. Heza Louisiana Dash was much the best in the finals of the $267,000 LQHBA Derby at Evangeline Downs on November 28. He will be aiming for his fifth win of his career with Gilbert Ortiz in the irons.