While many thoroughbred racing enthusiasts will be fixated on the eight Breeders Cup Championship races culminating with the $6 million Classic on Saturday evening, standardbred fans will quickly focus their attention on the live cards at the Meadowlands and Yonkers Raceway being contested that evening.

Saturday's second race is the $200,000 Kindergarten Classic final for two-year-old colt trotters and this race features Walner (Tim Tetrick), who has won six of seven starts this year and banked over $385,000 for trainer Linda Toscano, including last week's sharp 1:53 score in his Breeders Crown final. Walner likely secured divisional honors with that win one week ago, but he can enhance his reputation and his bankroll with another triumph in the Kindergarten on Saturday night. 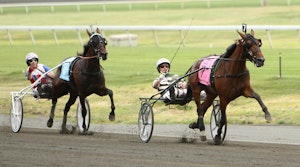 But looking to play the spoiler role in the Classic are New Jersey Viking (Andrew McCarthy), International Moni (Scott Zeron) and Explosive Matter (David Miller). New Jersey Viking has won five of 10 starts and banked over $130,000 for trainer Ake Svandstedt and the Maryland-bred drew the rail for this event. International Moni has only won once in nine tries, but his dam is Moni Maker, the durable trotting mare who enjoyed a stellar career on the track for trainer Jimmy Takter. Explosive Matter owns a 3-2-1 slate and $33,000 bankroll from eight starts.

Then several races later in the fourth and final Kindergarten Classic final for two-year-old pacing fillies, Someomensomewhere (Marcus Miller) will be looking to prove that her 17-1 upset score in the Breeders Crown final was no fluke. Someomensomewhere brings a solid 3-5-1 slate and $400,000 bankroll from 11 starts for trainer Tony Alagna, including a second-place finish as the 7-5 choice in her Breeders Crown elim the week before.

Saturday evening at Yonkers Raceway a trio of events toward the middle portion of the card earned top billing.

In the sixth, a non-winners of $20,000 last five starts class for aged pacers, McArdles Lightning will leave from the rail for trainer Steve Elliott, while aged warrior Clear Vision (George Brennan) will start alongside him. This Ron Burke-trained 10-year-old owns a modest 2-6-2 slate and $44,000 bankroll this year, but the durable and classy veteran campaigner sports a 32-44-34 slate and earnings in excess of $2.5 million from 195 lifetime outings. Fool Me Once and Texas Terror N drew outside but both merit respect in this spot.

One race later in the Winners Over handicap, Rampage Jackson gets the rail for owner-trainer Nick Clegg, while BJ's Guy, American Primetime, Polak A, Somewhere Fancy, Rock N' Roll World, Twin B Impressive and Blood Brother all rate as serious contenders. American Primetime equalled the all-age track record with a seven-length score in 1:50.1 three starts back for trainer Rick Dane, Jr., but he has been dismal since. Somewhere Fancy and Twin B Impressive have both won their last two starts against non-winners, while Blood Brother gets assigned the eight hole after beating this group last week by two lengths in 1:51.1.

Then one race later in the $45,000 Open Handicap for aged pacers, perhaps an early preview for several of these for the $100,000 Free State Free-For-All at Rosecroft Raceway on November 22, Bit Of A Legend N gets assigned the eight slot after his narrow score in 1:52.4 in this event last week for trainer Peter Tritton. Just to his inside are The Real One (Pat Lachance), third in each of the last two editions of the Open, Take It Back Terry (Brennan), Keystone Velocity (Daniel Dube), runner-up in each of the last two Opens, and Mach It So, an Open regular who was fifth behind Always B Miki, Wiggle It Jiggleit and Shamballa in the Breeders Crown Open last Friday at the Meadowlands.
Racing
Loading...