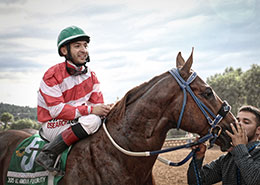 There is a new young rider on the Quarter Horse circuit who is quickly rising up the ranks based on a phenomenal year so far. The man in the spotlight is Ivan Carnero, 23, winner of the richest and most prestigious race in the sport, the $3 million All American Futurity at Ruidoso Downs on Labor Day.

The native Texan began riding professionally when he was 19 and made his debut at Lone Star Park near Dallas, Texas. He had an opportunity to work some 2-year-olds earlier this year in Oklahoma and one of the "babies" he rode was Jess Good Candy, a son of Good Reason Sa out of the Mr Jess Perry mare Jess Send Candy. Prominent Oklahoma horseman, Carl Pevehouse, who sadly passed away in 2014, bred the colt.

Jess Good Candy had won each of his three career starts coming into the All American Futurity.  AQHA champion jockey G. R. Carter qualified several mounts for the final, but opted for First Valiant Sign. Carnero was tapped by trainer Clinton Crawford and guided his charge, at odds of 10-1, to victory in the sport's richest race. The winner's share of the All American Futurity purse was $1.5 million, which vaulted Carnero to the lead in earnings for North American Quarter Horse riders.

For the year, Carnero has ridden 439 horses, won 61 races with purse earnings of $2,780,647. The most successful Quarter Horse jockeys are in their 40's, including Carter, Rodrigo Vallejo and Joe Badilla, Jr. Several of the sport's most accomplished, including Larry Payne, Gilbert Ortiz and John Hamilton are over 50.

Carnero is currently riding at Zia Park. With his talent and newfound confidence in winning the most coveted title in the sport of Quarter Horse racing, it's safe to say that Ivan Carnero will give his elders a run for the money!
Racing
Loading...