While many thoroughbred racing enthusiasts might be looking forward to Saturday's stakes-filled cards at Gulfstream Park and Santa Anita, whose highlight is the famed Santa Anita Handicap featuring the once-beaten Shared Belief, many of them may want to set their alarms for the morning card at the spectacular Meydan Race Course in Dubai which is offering a bevy of lucrative stakes on a day billed as Dubai World Cup Preview Day.

Since its inception in 1995 when Cigar edged past Soul of the Matter in the inaugural edition of the Dubai World Cup at the original host track of Nad el Sheba, the Dubai World Cup Day program has developed into one of the most anticipated racing days on the calendar in the world. Not only does Meydan, the newest, expansive venue offer the $10 million Dubai World Cup on March 28, but it also offers two $5 million races on the turf, the $2 million Golden Shaheen for sprinters and the $2 million UAE Derby for three-year-olds perhaps hoping to stamp their ticket to the Kentucky Derby at Churchill Downs on the first Saturday in May. 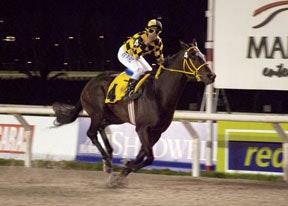 In the second race on the card, the $250,000 Al Bastakiya at the Preakness Stakes distance of one-mile and three-sixteenths on the main track, much of the attention will be focused on the undefeated Sir Fever, a four-year-old Texas Fever colt who has won all 10 of his starts while racing primarily at Moronas in Uruguay. This event will mark the seasonal debut for Sir Fever (pictured right), who is prepping for the Dubai World Cup. The South American sensation has won three Grade I events at Moronas, but his lifetime earnings of $277,000 reflect the lower purse structure at the track. His first start back tomorrow is hardly a walkover, especially at the longer distance and the fact that the race is merely a prep for the World Cup.

Looking to post the mild upset tomorrow morning in the Al Bastakiya is Mubtaahij, a three-year-old gelding trained by Mike de Kock. While Sir Fever is making his seasonal debut and prepping for the World Cup, Mubtaahij has finished first once and second once in two local starts this year, capturing the Grade III 2000 Guineas in his most recent start, and is he is prepping for the UAE Derby. Sir Fever is the older runner of the two and likely more talented, but Mubtaahij has a decided edge in fitness on his unbeaten rival right now and could be primed for the minor upset tomorrow morning.

One race later Meydan will host the Grade III, $200,000 Mahab Al Shimaal, a six-furlong sprint that is the last local prep for the Golden Shaheen. Fittingly the race features a past Golden Shaheen winner, Krypton Factor, who was second in his seasonal debut here last month and looks poised to regain his lost luster. One year ago Krypton Factor suffered through a dismal campaign, winning only once in eight starts and earnings a meager $35,000. He boasts a solid 9-8-2 slate and $2 million in career earnings from 37 lifetime tries and should improve off his latest effort and then take another step forward in three weeks.

After a solid three-year-old season in Europe last summer and fall, Farmah will make her four-year-old debut tomorrow in an obvious prep spot for the Golden Shaheen. The daughter of Speightstown posted a 4-3-1 slate and $150,000 bankroll from nine starts last year and ended the campaign on a strong note, taking minor stakes in France and Italy. Three of her four wins came on the turf in Europe, so her main track ability is still a question mark at this point.

While Farmah will be looking to adapt to a new surface, Mashaaref heads into the Mahab Al Shimaal having won twice in three local outings this season after making only one start all of last year. The seven-year-old Cape Cross gelding won a minor $120,000 stakes here last month and appears to have returned to earlier form. This is still a big class leap for the aged runner, but he has already displayed an affinity for the surface and could develop into a major contender for the Golden Shaheen with another big effort.

The likely favorite for the Mahaab Al Shimaal is American invader Cool Cowboy, who makes his seasonal debut for trainer Doug Watson. Last year at age three, Cool Cowboy posted a 2-3-0 slate and $125,000 bankroll from only five starts but ended the season by taking the $85,000 Sophomore Sprint Stakes at Mountaineer Park in West Virginia by nearly five lengths. His two other stakes tallies were in minor stakes at Prairie Meadows and Tampa Bay Downs, so Cool Cowboy has not yet emerged on the radar for many racing fans stateside. But that could change dramatically this weekend and three weeks from now.

One race later Meydan offers the Grade III, $175,000 Meydan Sprint Handicap, a five-furlong dash on the turf that is a prep for the Grade I, $1 million Al Quoz Sprint over the same distance and surface here in three weeks. This race is legitimately wide open, with Caspian Prince, Via Africa, Caspar Netscher, Sole Power, Moviesta, Ahtoug and Extortionist all with a chance among the robust field of 16 runners. Ahtoug was the runner-up in this event and the Al Quoz last year and certainly merits respect in this spot again for trainer Charles Appleby. 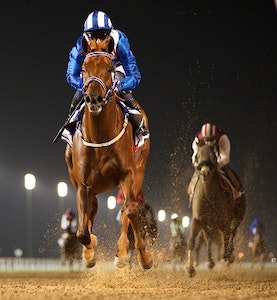 Then one race later in the Grade III, $200,000 Burj Nahaar at one mile on the main track, a prep for the Grade II, $1 million Godolphin Mile, much of the focus will be on railbound Tamarkuz (pictured right), who has won his last two starts over the strip with plenty in reserve and should go postward at 6-5 here. The five-year-old Speightstown stallion did not adhere to the sythetic surface here one year ago, but he has certainly taken to the new dirt track and is clearly the one to beat this weekend and in three weeks time.

But those looking for value this weekend could take a swing at Romansh, Gold City, Muaanid, Heavy Metal and Layl, all of which have also performed well at the distance or over the strip. Romansh spent his entire 2014 campaign in graded stakes company throughout the United States and after a dismal effort in his seasonal debut at Meydan, came right back to run a respectable third behind Tamarkuz. Gold City was second to Tamarkuz last out, while Muaanid, Heavy Metal and Layl all owns wins over the main track here this season.

Then in the sixth, the Grade II, $250,000 Dubai City of Gold at one-mile and one-half on the turf, a prep for either the Dubai Duty Free or the Dubai Sheema Classic, each of which are worth $5 million in three weeks, distance specialist Sheikhzayedroad brings a stout reputation but is making his six-year-old debut on Saturday. He owns an 8-3-4 slate and earnings of over $530,000 in 22 lifetime outings, all on the grass, but he has also won twice in three starts at the demanding distance. None of his principal rivals, True Story, Songcraft or Sky Hunter has yet to attempt the marathon distance, so this event is more for review than wagering.

Then one race later in the seventh, the Grade I, $400,000 Al Maktoum Challenge at one-mile and one-quarter on the main track, nine runners will be seeking the top prize and a solid prep for the $10 million Dubai World Cup where American invader California Chrome is expected to be the favorite. This prep features defending Dubai World Cup hero, African Story, who won the race over the synthetic course here last spring. But he finished a nondescript seventh in his local debut over the main dirt track here last month and may be a different horse on this surface.

But Prince Bishop and Frankyfourfingers both appeared to handle the new surface with little trouble last month in the Grade II, $250,000 Al Maktoum Challenge here. Frankyfourfingers prevailed in that event over Prince Bishop by a head and both should attract most of the attention here and both will be looking to move forward off this race. Long River, who spent much of his previous campaign in lucrative, graded stakes in the U.S., will make his seasonal debut. He has won four of 16 starts and banked almost $450,000, but he has yet to attain success in graded stakes company.

Then in the eighth race finale, the Grade I, $300,000 Jebel Hatta Stakes at one-mile and one-eighth on the turf, local standouts Vercingetorix and Hunter's Light will face one another in their final prep for the $5 million Dubai Duty Free where reigning Eclipse Award turf champion, Main Sequence, is heading next following a sharp score in the MacDiarmida at Gulfstream Park last month.

Of the two, Vercingetorix delivered the more impressive victory when he rallied to capture the Grade II, $200,000 Al Rashyda at the same distance over the course in late January for de Kock, but Hunter's Light owns two wins at the meet over the grass, albeit in longer races. Vercingetorix has won seven of nine starts and banked over $1.7 million and could eventually have the most upside off this race, but Hunter's Light may own the edge in fitness this weekend despite cutting back slightly from 10 furlongs to nine for this affair.