Followers of Quarter Horse pedigree have always taken notice of progeny sired by One Famous Eagle. The noted stallion's champions are winning at racetracks across the country in 2016, and he recently added another milestone to his impressive resume. He became just the fifth stallion in  history to eclipse the $5 million earnings mark in a single season. 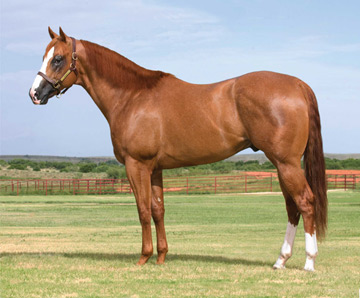 The son of Mr Jess Perry stands at 6666 Ranch in Guthrie, Texas, and set records as a first crop sire, continuing with exceptional runners each year.  His top performers include All American Futurity champions, Imperial Eagle and One Dashing Eagle; Texas Classic Derby winner Bodacious Eagle and graded stakes winners Hes Relentless and Moonin the Eagle.

What's remarkable is that One Famous Eagle's offspring are winning races all over the country!  Obviously with two victories in the All American Futurity at Ruidoso Downs, but also Los Alamitos, Lone Star Park, Remington Park, Indiana Grand and Sunland Park. On Saturday, October 15, the closing day for Prairie Meadows in Iowa, One Famous Eagle had three stakes winners on the card:  Mr Jo Eagle, Wrs Quick Eagle and Fast N Famous Jeans.

The top all-time leading sire is the legendary First Down Dash, a son of Dash For Cash, whose offspring have earned a record $83 million. He stood stud beginning in 1984 and had a remarkable 20 crops, including 1,163 winners; 224 of those were stakes champions.

So when handicapping the remaining Quarter Horse stakes this year, don't overlook One Famous Eagle. He is just 11 year-old and is likely to continue to build his "famous" legacy for years to come!